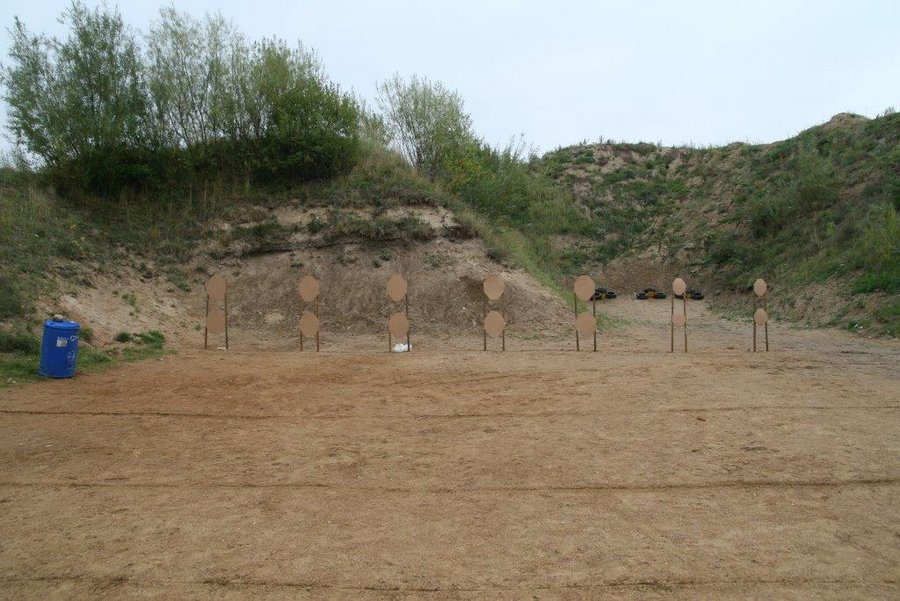 After Kimu Sensei has run the Pilot Project, and the plan has been fine tuned on the Chief Instructors, the Students in Shindenkan now has the opportunity to attend the POMW III in the SDKSkyt arena, where shooting now is brought out under the open sky, with 9mm shooting and increased knowledge of guns.

POMW II was rounded off before the end of summer, with great success and fantastic results. The Attendees who choose to go on with POMW III, had as the first part of the course trained at home, with 2 ½ weeks of dry training, according to the POMW Shooting Technique Manual, so their POMW shooting technique was ready to bring out under the open sky.

We met Sunday September 01 in the afternoon, in “the hole” at Hanebjerg Skyttecenter, which in short time were made ready for POMW outdoor shooting – equal to terrain shooting. IPSC targets was used, since POMW Pistol Intermediate after the conclusion can lead up to a DskyU DSF A license, followed by A+ “shoot alone” license. This is the license all the shooting Instructors have.

Since outdoor shooting does not present as rigid a frame as standing in an indoor booth, but just has a shooting line, and unpredictable conditions such as sun, wind and rain, of course there was from the start focus on Safety, safety, safety. This meant that info concerning safety zone, loading table, safety angles and general weapons handling was repeated. There after there was dry training from the shooting line with 9mm CZ Shadow SP01, so that all had the greatest confidence with the guns, before loading with live ammunition. During dry training and the following wet training, every shooter was supervised by a dedicated shooting Instructor, again due to Safety, Safety, Safety, but also to get the optimal training, with focus on POMW shooting technique.

Everybody got comfortable with the guns, and practiced their POMW shooting technique, through terrain shooting at 7, 10, 12, 15 and 25 meter distance. The bullet spread was analyzed after each round, to optimize – most often by focusing on POMW shooting technique. The worst fear of recoil disappeared, and all worked with focus on their own shooting, and safety, no matter if the hot pistol shells from the guy next to you were hitting your safety glasses, or finding a way down your collar and rolling down your neck. 🙂

When a comfort zone was found and the technique practiced, it was time to take it to another level, and work on, control of recoil and reset, to better and faster make precise aimed shots. When the day was over most had sore Tums from the constant loading, which involves pressing lots of 9mm rounds into a magazine – something which takes getting used to, and perhaps a few bruises, before running smoothly.

The Sunday after September 08, everybody had had a week to do dry training at home and to work on errors from the last session. There should be at least 10 times the dry training, compared to wet training, and when you wet train, every shot must count. Partly because of the cost of shooting, but mostly because the attitude is, that every shot counts. Since we do not waste either time or money.

We repeated the lesson from last time – meaning Instruction and Safety, Safety, Safety, and there after dry training, before we moved on to wet training. Since the shooters now had 100% fresh weapon handling from the week before, and just completed dry training, they scaled down to “only” 2 Shooting Instructor per shooter J. There was shot at distance 7, 10, 12 and 25 meter, this time training reset from the start. There after we went back to 7 meter, and trained transitions, from the bottom up, form side to side, and finally in “circle”. With the transitions we also worked on split, which means to get a steady flow in the round of shots fired, which in turn lead to much faster shooting, than shooting in waves.

Terrain shooting was increased by almost an hour, since we were given some time from the next users of the range, and in the last hour everybody was pressed to perform even better, and faster, but still with focus on Safety, Safety, Safety and technique. Following the clean up – with lots of Range Chickens :-), we all went indoor, to repeat shooting with 100% focus on POMW shooting technique. It was very different to be inside, after the hole morning in the fresh air, and most was marked by already having shot a couple hundred rounds of 9mm, with the fatigue that followed, so concentration was not 100%. After cleaning the guns, there was shooting with 9mm again, but at precision targets, with analyzing the spread and points. It was a somewhat long afternoon for most.

Sunday September 22, it was time for the last part of POMW III.
Again it followed 2 weeks of dry training, so all had polished their POMW shooting technique, and raised the level ones again. All morning was again used in the “hole”, with “rough gun shooting” with transitions, both up and down, from side to side, and in “circle”. The shooters showed great safety in their weapons handling and concentration throughout, and did not let outside elements disturb them. Reset was worked in well, and Split times had reached a nice rhythm.

After the transitions were well trained, it was time for a “Joker”. Kimu Sensei had a barricade set up, that you had to shot around. The Point here was to place yourself at the correct distance to the barricade, there after to load you gun, lean out, shoot the shots, unload and there after lean back in behind the barricade. Of course this had to be dry trained, before all got a chance to try it, under Kimu Sensei’s personal supervision. Finally there was shooting at a steel target, distance 50 meter, and again many surprised them selves by actually hitting at this distance. “You can do much more than you or others ask of you :-), yes, because there is room for everybody”, except the Danish “Jantelov”. .

Yet another quick clean up, and then to Skyttehuset to wash hands, eat lunch, and there after a presentation from Kimu Sensei, giving the up to date results from the POMW project. Then time to clean guns – know you weapon, followed by range shooting with cal. .22. After a couple of hours with “rough gun”, it felt a little like shooting with an air gun, but it is important to maintain your POMW shooting technique, and not jump where the fence is the lowest. Which nobody did, because opposite the last time, there was a high level of concentration during the hole event, maintained by a steady course towards the goal, set by the Team of Instructors. Bullet spreads was analyzed, POMW shooting technique performed, and super great results was delivered, which can be seen in detail in the official POMW III article.

You can now, again, but at a much higher level now, conclude with 100% surety, that POMW Shooting Technique Manual, combined with the attitude trained through Yakami Shinsei Ryu, gives very good results in a very short time.