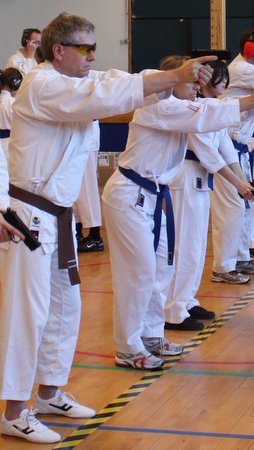 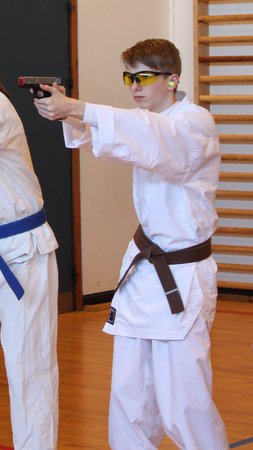 The POMW training course was ongoing and in contrast to the first module, we were now engaged in the practical handling of handguns. With both of us, Anders and Søren, we had a large and eager anticipation for the next two days with about eight hours of concentrated weapon handling and shooting. It was now that the POMW project, which is derived from a hypothesis of Minouchi Sensei (one of Soke Sensei Tonegawas masters), concerning the possibility of speed, efficient and optimal learning, should be tested. It was submitted that Shindenkan expect that the POMW process will provide a 10 times faster and better learning than in a normal Shooting Club – which really will goes beyond normal limits and move the prevailing standards of learning.

After a brief recap of the introductory module in January, participants were taken on a typical “Kimu Sensei” travel in shooting theory – i.e. As usual, a very thorough and structured learning with nothing left to the imagination. Kimu Sensei motto is that the wheel was invented and everything served on a silver platter, which is based on more than 1000 years of knowledge and methodologies.

There is a usual expectation about this. In addition, would we be able to receive the essence of Kimu Sensei’s own very intensive learning. However, at this point we began to ask ourselves, whether it could be true that we after these two days would be in possession of the right skills to master a handgun. In addition, what the relationship was to our daily training in multi-track karate in Shindenkan? Would we, in such a short time, be able to handle the firearm, and reach a level where we could hit the target? It was really only in the wildest fantasies that we could imagine ourselves having to shoot standing and walking. There was targets in different setups, and we had an expectation that it would be fun and that the small boy’s expectations would probably be challenged. However, the motivation was great for both of us. We were delighted to get started.

However, in our minds it continued with the speculations on its importance, in which we have trained martial arts in a multi-track system and then bring this knowledge to a completely new area of competence – firearms. Prior to the practical part of the module, we had discussed serenity terms. Guns, compared with previous clarifications on the application of our karate skills, the use of ken, kotachi and of course – all “dangerous” weapons in each context. “It’s not the gun that kills, it’s the man behind”. It is a statement, which we have heard many times before, during the rest of the weapons training, but now the concept have an entirely new meaning, a new taste. Now it was the gun we were faced with and that was it and its functionality we should deal with. We should individually relate to the use of the weapon and the extension of this our individual inner clarification. Wow, this is not just a “Small boy” gunfire, but deeply serious and a natural extension of our uncertainties within the other parts of the multi-track martial arts in Shindenkan.

Shindenkan is a multifaceted martial arts system, which recognizes that the wheel has already been invented; we are trained to learn the lessons of history, be good to ourselves and use the learning of others. Moreover, it is important to move with the times and relate to the development in the surrounding world – including the arms and aggressiveness an opponent on the street may have. The”Breivik” case from Norway put all this in perspective for both oneself and one’s family and children. One of the many questions we had discussed in the course was “How do I know if I have been clarified?” We were through a self-discovery process (DO – MICHI as expressed in the ancient Densho degrees). In addition, as in all other parts of Shindenkan it is important to be clarified so that you can act the right way. This in turn means clarification in mindset and skills – and especially in the direction of your goals. In addition, the answer may be complex but in fact is very simple – “I know when I’m there!”

So I am clear about the use and handling of firearms, it might save my own, my family or the lives of others – ultimately. However, I must be total clarified BEFORE I get in that situation.

Initially, we examined the four main areas that are safety, safety, basic and security. It is everyone’s responsibility to make sure that the safety requirements, which also was taken very seriously. In addition, you get far with common sense.

Kimu Sensei emphasized that the most important thing in shooting are the basic techniques – as it is with other competencies in Shindenkan. Kimu Sensei underwent the theory about holding a gun, operate the sighting and “implement” a correct draft.

It was now that our air guns CZ75D compact CO2 non-blowback came into use. The Shooting process was as usual very carefully planned (and took account of the individual shooter). There was great discipline in implementation in order to get maximum input in both arms control and the shooting, which took place in different shooting distances and lanes.

Across the two days, we were shooting at different distances, first on a short distance, then further away, and eventually return them to the already tried distances. The interesting thing was that in this training pattern, there was an internal “self-evaluation” where the individual with the same could infer whether the technique was correct and what improvement measures were necessary. During the two days, we could follow our own development and could see the great improvements that occurred regularly across the whole team. As we had become accustomed to guns, aeration and initial nervousness had subsided, we could really enjoy our learning curve – which was far better and faster than we had dreamed about.

As the two days went by, with shooting, troubleshooting, optimization and learning, we became better and better. The danger of this development was of course a certain arrogance in relation to one’s abilities, but as Shindenkan’er we know that the focus, dedication and attitude when it is right, has the paramount importance of the result. So despite fatigue and long hours with a gun in hand, we managed to retain the right mindset for learning and respect for the weapon.

It was a powerful experience to go through such an intensive learning program, a large concentration and achieve a good result as we did. Kimu Sensei had shared some empirical with us from the shooting clubs as well as from his own experience of shooting. It looked as if we were all on track and achieved good results, despite the short learning programs and lack of conditions.

Given the intensive course, Kimu Sensei’s feedback (both individually and in groups), it is confirmed that Minouchi Sensei hypothesis for fast, efficient and optimal learning was right. With more than 1000 years of knowledge, use of commodity from our “normal” karate training and with the right attitude, it is possible to achieve good skills, even in areas where there “immediately” not was prerequisites.

However, despite the good progress and the enormous personal development, there were a lively discussion in the car on the way home. We tried to create a link between what we had been through, the real world with the firearm and violence, as well as our own clarification. It is healthy to have this discussion with my son, who in some areas comes from a completely different point of view and relate to the outside world than the older generation who may have some experience in the luggage. We are sure that this discussion continues both in relation to POMW, but just as much in relation to other parts of Shindenkan including Shinden-fight, Hsingi mm. We are going to look at learning in a completely different way in the future, and not least to relate to a correct mindset and clarification.

A very big thank you and acclaim for Kimu Sensei for a very exciting and qualifying training. In Shindenkan we are uncompromising terms. Quality – and if we do not possess a competence it must be built up and spread – it is POMW is unique example of.

We were tired when we got home on Saturday afternoon. However, even the lawn mower was at work, the thought went back to the last two days and POMW – Project Old Modern Warrior. Now we look forward to a training with real ammunition in 2013.