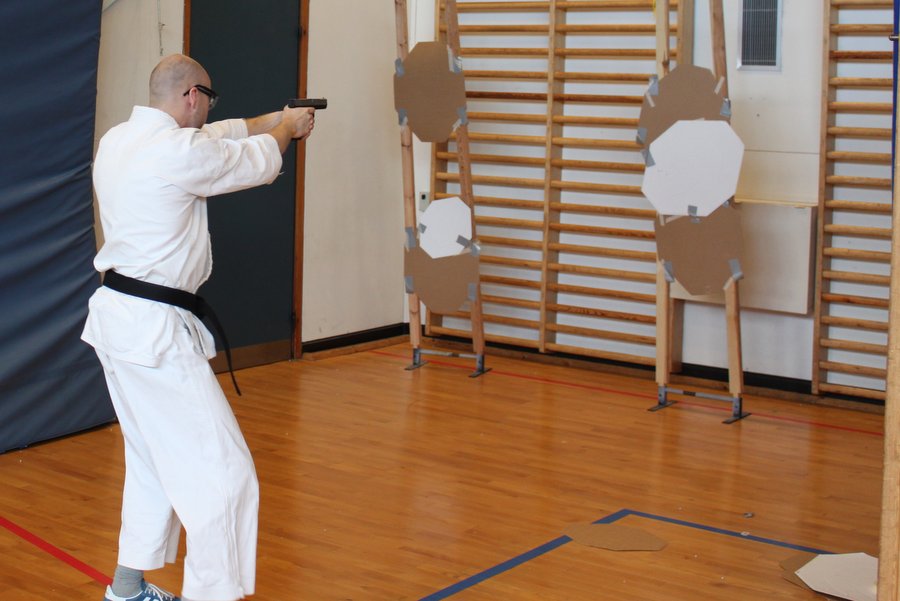 Like many of the other courses, I had been looking forward to the start of the POMW II – recap of POMW I. At home, I had continuously, or rather repeatedly, my air gun in use to maintain my shooting technique. Despite this, I was glad before the course to get it all repeated ones again, since you always can learn more and become aware of new working areas. I will also admit that I am a bit of a little boy when it comes to shooting. The running around and shooting, even if it is with air guns, makes me feel a little like Jason Bourne or Mr. 007

In the beginning of the course it was like last time, it started with a theory part. Here we generally was told on firearms and Minouchi Sensei’s theory, which is the whole basis of POMW. In addition, there were also a recap on the Technical Shooting Manual, which contains everything from proper hand position on how to use the sight tolls properly. Throughout the course, we did it like last time, where we constantly put great emphasis on safety, safety, safety and safety. We have to do with weapons, and one day we use live bullets so at worst case it can be life and death that depend on it. This is perhaps the explanation of why participants, was very focused throughout the course.

It turned out that it was good for me to have gone through the double hand position, the use of the sight tools, as well as aeration and breathing. It is important when you shoot, is actually just like in karate, not the individual things but all things i.e. the details. If any karate technique must be good, it is not just the leg position that have to be correct, but also how the Hikite-hand is in the performance. Therefore, it is important when you shoot that you are aware of all the details before you pull the trigger.

The first exercises took place standing, and here you could rehearse the entire technique because there was time for it. As time went on and we became more familiar with the technique, we start to get movement in the exercises. This was done in the way that we went back and forth while fired shots against the targets. On the way, we trained movement in a confidential manner. During this course, we also use some laser guns, the advantage of them was that they were just as heavy as a real gun and therefore they were different to shoot with, as you could be tired in a different way in terms of their weight. While we were shooting with them, the distance would get longer and we trained to shoot both up and down, instead of on a target that all the time was sitting in chest-height.

At the end of the course, we should go through a stage where all our training was assembled in one. In the field, you had to shoot both down and up, while you run forwards, sideways and back. There was the whole thing together and it was fun to try, and maybe because of this, you had to find a pace where it was quick, but still was effective – I am looking forward to next POMW course.

At the end of the course, I was actually given an Aha experience, when I saw a connection between the shooting technique and karate basis. When you move to the side while you shoot, I have the same feeling as when I make Kata Naihanchi. As in the basic training of cross-tension and movement from the Jo-course that you use, when you are moving forward and back with the gun.

This means that it is important to listen and checking yourself. Also to remember all the details, and to practice and sometimes maintain the training. For me one thing is always essential that is to be working with the basis and mindset. It was reaffirmed in the course, the mindset slipped once and resulted in a DQ and basic stance was essential during shooting in motion. It is important to remember that you first have to learn how to walk before you learn how to run. Furthermore, it is important to focus on the process rather than on the target, as is everything else in karate.

– Thanks for another great course