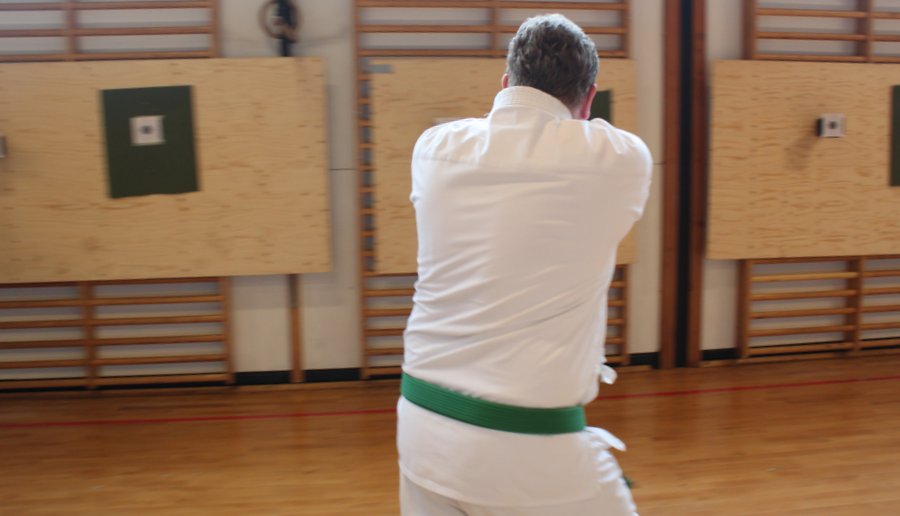 My wife, my daughter and I was with excitement looking forward to the last part of the POMW I course, especially since it already had been postponed for about four months.

On Saturday morning about 8.30, gives the advantage that you can avoid the Friday afternoon rush hour traffic, and we hurried in and got ready for a brief introduction. It turned out to be a recap of facts about arms control in Denmark, the history of weapons, gunpowder and so on. A little heavy diet for someone such an early Saturday morning. Personally, I am fine with it because my body could wake up, and I like working through facts and good presentations. In addition, it provides an opportunity to get the joy of anticipation a little bit under control.

The expectation of another day of shooting, of course not with live ammunition, but that does not really matter, because you can still see the gun smoke for yourselves as the wild Indians on horseback attacking the train rack, and just wait until I get to pull my air gun … .. Well maybe it was as said before all right just to come down to earth, with a good round of theory 🙂

The presentation finishing off with a recap of the main points:
1) Proper hand position
2) Proper posture
3) Proper use of the sight tools
And not least.
4) Troubleshooting if you make trigger mistakes, or otherwise cannot get the mindset right out into the body.
… In addition, did I mention 5) Safety? We have to do with weapons so safety is very important. You cannot kill with a laser gun or an air gun, but we train, as it was real weapons, which can maim or kill.

Finally, we came to the shooting range … Yeah, then, into the gym, but it suited me fine! Because we could polish the technique, together with the previous course participants from POMW II, who also participated in this course as a recap. Then we have chance to get the experience and methods deeper under the skin when we are going at the shooting range.

The joy of expectation materialize again, along with a small smile, though it still was only with air guns.

I felt that all participants were better than the last time, though it was 4 months later, and only a few participants had completed their dry training in the recommended amount. Because of my back problems, I had primarily trained hand position and use of the sight tools, and not nearly, enough posture. Maybe not the best choice.

We started to shoot at the usual 3, then 5 and 7 meters – back and forth. I suppose it was to build our confidence and polish the technique of. In addition, it worked. It was actually not so bad.
… In addition, about the Refresher, remember safety, safety, safety … remember it or become DQ’et (= disqualification = Time-out and 2 minutes on the bench).
As we refreshed the shooting, the tensions in the back came up again, as I remember them from the kenjutsu course. Note to self: Make more back exercise 🙂

Then it was time for the laser guns. We should hit more targets (ordinary brown IPSC targets), and avoid hitting the white no-shoot IPSC targets.
The first part of the training with Laser Guns were to hit several targets from the same position, but it did not take long before we switched to shooting in motion.

I had a strange experience during my own shooting. I shot at the targets, and saw that I hit it, but afterwards all told me that I actually did not hit all the targets, since I missed a target board. One can delude themselves very much… I still do not understand it. I was sure that I had hit the targets – all the targets. Then it is good that there are other people around me, who could tell what really happened.

After the “Star Wars” experience with laser guns, we went over to static shooting with air guns. There were to be shot on poppers – goals that overturned when it is hit properly and others that light up when it is hit, resulting in a more direct feedback, and looks like intro videos of a real shooting ranges.

Now the course approaching the end, but how would it end? The tension raised again.

As expected, the course culminated with what we had worked our way through in the last 5-6 hours: Shooting in motion with air guns against fixed targets.

We should, move, aim and hit 10 stationary target in line. Halfway we should switch from going forward, to go backwards, still while we were shooting. Then we should safely move over and switch magazine (here the instructors warned us in advance of the possibility of being DQ’ed because of a wrong pointing angles), continue to shoot target boards, and avoid hitting no-shoots (white discs), finishing with poppers (target tumbling down).

Could I do it? I could remember everything I had learned. However, was it deep in my heart, or would I have to think along the way? Do not shoot while you set foot on the ground, use your hips to move, finger on the rail when you are not aiming at a target? What’s more … Remember that everyone is looking at me, judge me <PANIC!>… or isn’t it? 🙂

After having successfully completing the course, it was my turn to observe people’s reactions. The tension in those who had not yet shot, and the relief of those who had completed, perhaps more than attention to the one who was now on the floor.

However, one thing is certain – I was not the only one who had been up on the high mental level 🙂