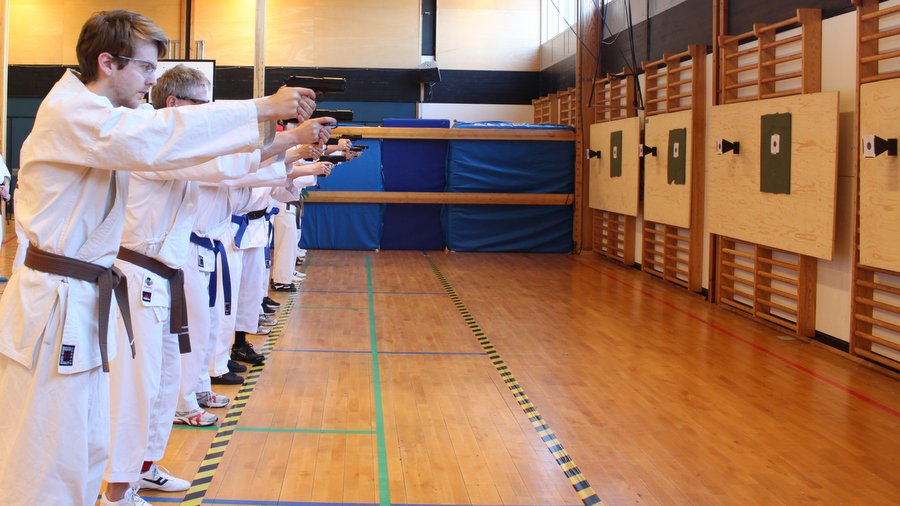 On Saturday 20’, Th of April a strong group of Shindenkan practitioners was ready for a round of POMW (Project Old Modern Warrior) in the Tjørnelyschool in Greve. In addition, what does this mean? This meant training with air gun according to the Technical Manual of POMW shooting. It was against stationary targets, but also with transitions and during movement!

For some it was the end of their first POMW course, and for others it was a recap, and a prelude to the POMW II course. I was among the second group, and for me it was a matter of finding out, after about a one year ‘break’, how good my shooting skills still was. The pistol (Read: Air gun) had been tucked away in a while, but in the last few weeks, it had been used again. In addition, I think that it really had gone pretty well. We still had a good feeling with the gun, and I felt that I could make a good shot. On the day, the first 10-20 shots was maybe a little rusty, but it went actually very well. A long break is of course doing something whit your skills, and my shooting where probably better at the end of POMW I, but I felt that the vast majority still hung on. I noticed however that I had gotten new habits. Last time my shots was a little to the left, but this time it was a little above right. This is how it can go!
The program of the day went like this. We started with a theoretical session in which Soren Renshi and Martin Renshi, told a little bit about how POMW have been created, and we considered various shooting disciplines, both in real life and in sport. And of course also a lection about the shooting technicality 🙂 Then we started with the traditional ‘target shooting’ at different distances to a single goal. A little later, the transitions, i.e. when switching between multiple targets, and after that, with movement also. Finally, we set up an “IPSC stage’ where you have to complete it, by running through it and hit various targets, both while they were in motion and stationary. In addition, for those who are not familiar with it, IPSC is a shooting discipline, focusing on ‘practical’ shooting. Where you move, you shoot around corners and other obstacles, shoot at different distances, and so on. In short terms, it can be considered as the Formula 1 of shooting, where the majority of the world’s elite within shooting, is doing their work!

As I mentioned earlier, some of us had tried the course before. So the program was well known, and it traded most of all to make a brush up to our skills before the next POMW course. In POMW II, we should shoot with real weapons, i.e. .22 And 9 mm pistols. Therefore, we all started to prepare ourselves with some home training. Ammunition is unfortunately a bit expensive (at least if you have to shoot many shots) and therefore we might as well prepare ourselves thoroughly, so that we get value for our money! The important thing when you shoot is. Proper hand position. Proper use of the sight tools. Proper pull of the tricker. Proper body position (body, breath, mind, setting), and one should of course evaluate after each shot, so that you get the best learning. All participants started to prepare with the Technical Manual of POMW shooting. Weapons have some weight; and in addition to this, we have being instructed to train our arms, so that we can manage to hold the gun for a long time. This can, for example. Be done by keeping a 2L soda bottle at arm’s length for about 30-60 seconds. A filled bottle that is. Something I’m sure, is looking very amusing if your friends were to look by your home 🙂

Overall, I would say that I am excited about the upcoming POMW II course. How well do I transfer my skills from the exercise with air gun to the real gun, and is there a big difference? At the higher caliber, should there be a particular challenge to the weapon, but hopefully my home training help to overcome this. Luckily, there are still good time to practice, and I am sure that we will have a successful and exciting course, with many good shots! Moreover, I wonder if a sequel follows in this article, either from another or me 🙂 !