POMW – Or how I learned to shoot without bullets’ 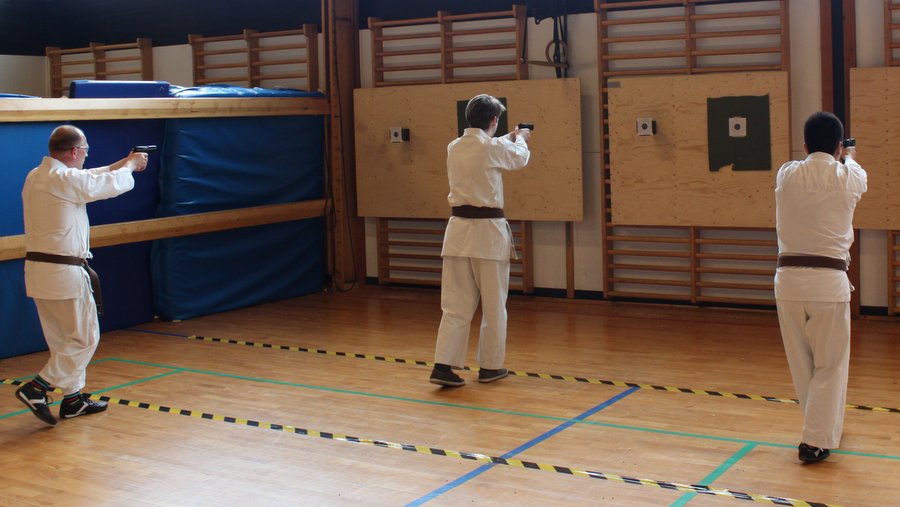 A few days ago, the first module of the POMW A course ended that dealt with modern weapons, or more accurately shooting with guns. In addition, if I have to say what the outcome was, then I can do it in the following:

For about a month ago, I had never used a gun. When I first tried it, I could not hit accurately at 3 or 5 meters distance. In addition, at 7 meters it was a challenge just to hit the target. Now I can say that I can shoot safely at up to 15 meters or more. I can switch between multiple targets, and I can even hit the target roughly in motion. Therefore, I say, that there has been something of a leap!

However, how is this done? It is perhaps the most interesting thing. From the first time, we met and tried to shoot, until we concluded in the last weekend, there have not been fire a single shot from the POMW participants. In 21 days, the only thing we had trained was to hold the weapon properly, take aim and pull the trigger. Completely without ammunition! Some of us bought an air gun for practice use; others used just a toy gun. In addition, who had done what, was actually hard to say. Fact was that when we met again, all participants could shoot significantly better. Where there previously was a great variation in the holes, everyone could now see a collection of holes on the target!

What kind of hocus pocus is this? Did we all have a magic elixir that made us better shooters, or what? No, we had only practiced the essence, as we always do. For it is not about how to hit. It is not about where the hole is on the target. It is about the correct technique and mindset, just as we are used to in karate.

Although we all ended up with being significantly better to hit the target, it was not this subject, there was put most emphasis on in the course. There was spent most time on safety. In addition, this is despite the fact that we only shot with air guns. We trained, as if it were real weapons we used.

Hey, wait a minute! I have not mentioned that we shot with air guns and not real guns. Is it not a very different thing? The thing is that all chief instructors have been starting to train with real guns. They say that when you shoot with low caliber (light artillery), there is almost no difference. For heavier calibers, it is a challenge to handle the recoil; otherwise, it is exactly the same technique to use.

So the difference is very small, and when you think about it, it’s really very good to start with air guns, where you do not have to rent a shooting range, and a safety error (did not happen POMW course) do not end up in someone getting hurt.

With that said, I continues, and most others, most likely with real weapons next year, in the next part of POMW. Therefore, it is probably not many people who would ask a question about that 🙂

In addition, if it still seems odd, it is actually quite simple. Firearms are a modern invention, which is made so that, with short training it can achieve high efficiency. One can become an elite shooter much faster than you can be a sword master. In addition, we have just used the skills we have from our normal training to train disciplined and efficient, as well as we can 🙂

It has certainly been an exciting experience. In addition, there is no reason to feel uncomfortable because firearms are closer to reality than the samurai sword is. Both things are just weapons, and here in Shindenkan we choose to relate to things, instead of looking the other way, and hope that someone else takes responsibility for us.