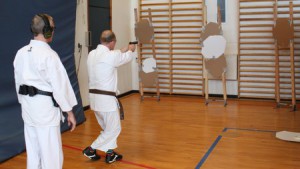 PROJECT OLD MODERN WARRIOR
Part of the Black Belt toolbox, TG4
3 modules, of which the last module course was held for 2 days.

POMW I A
I was excited to see what we have to go through. Although there had been a good description on the course invitation. Well there is always (there used to be) room for a surprise or two!

First Kimu Sensei gave a thorough description of the content of POMW, and how the project had occurred (see other articles on www.jokokan.com)

Then we went ahead with development of weapons and the use of weapons in a warrior’s life through the ages, including relationships between combat skills and distance to the opponent, by using different types of weapons.

The conclusion was, that the closer you are to your opponent, the more important your combat skills is.
Think about:

Think also of the recent debate about unmanned drones, that from the other side of the world, can hit targets only controlled with a “ computer Joy-stick”.
– How much combat experience / -competence is require from the user of the”computer Joy-stick “?

The conclusion must be that the length / range and skills (Quality / technique) means everything!

In addition, the combination of this, DO – MICHI – The modern way and the original way, must mean that if we can combine human clarification, self-awareness (Densho degrees) with technological developments, then we almost have achieved total unrivaled skills.

However, the overriding factor will always be.

– Where long/deep are you in your self-development – how far are you in self-awareness (Densho degrees)!

POMW’s level (self-awareness / clarification) can be described, as a transition between the “Elite Soldier” and “Elite Samurai” – The level of flow between TG3 and Okuden. Can an “Elite Soldier” “go back” and begin to work with himself, start “from scratch” at a “master path”? He / she is a great warrior – at least in their own eyes. In many cases, this will not happen. However, an “Elite Samurai” will always be able to work on an “Elite soldier” level.

Kimu Sensei gave an example for thought:
“If you and your family are facing a person who threatens you with a gun, but the person loses the gun – are you ready to pick it up … and use it?

Here your inner clarification are tested again! Are you ready to pick up the gun? Knowing that if you do this you may need to use it – perhaps fatal for your opponent! Are you clarified?

POMW B
Started with a brief summary of POMW A, after which we went through basic shooting technique based on

This is achieved by following the five basic steps:

2. Correct use of the sight tools (every time!)
– Aim between 5 and 14 seconds before the shot is fired, depending on the distance to the target
– The sight tools must be clear – the goal must be blurred
– Both eyes open – Aim with the dominant eye (finger test!)

3. Properly draw
– Inhalation of drawing and exhaling on pulling the trigger
– Squeeze and press

5. Troubleshooting / evaluation
– Lower the gun safe! after each shot and evaluate your performance

REMEMBER:
– Never have your finger on the trigger until the target is sighted
– Take your finger off the trigger immediately after the shot is given
– Discharge: magazine out, empty chamber, lowering the tap
– Weapon Orientation, always be sure

Then we started to operate the weapon we were given, in groups of two.

Work on the basic steps are easily said, written and read about, but it is just hard to work with ALL THE TIME – YES!

There is not much John Wayne about this, but every time I went through the whole exercise, I got a little better understanding of the fact, that it actually had an effect.

After a few hours, which flew fast, with shooting from various distances and with several DQ’s (Disqualified) when the safety regulations were violated, we were sent home.

I was tired, but already looking forward for next time.

Until next time we all had to work out the five basic steps, but without shoots (dry firing), for 30 minutes each day.

POMW C
We met again and everyone was excited and talked about, how much each of us have been practicing lately.
It was a little different, ranging from 12 to 14 days up to 21 days.
The course of the two days together as a module is in my eyes a kind of awakening to shoot properly.

The 30 minutes of exercise every day (almost :-() had actually done wonders. For me it had the greatest importance, and as I had and still have, difficulty with the double handle. It is difficult, but not impossible. Each time I think I succeed with it, it can be seen on my ability to pick my shots to score. It is not always in the middle of the board, but in overall in a good “smudge”

POMW C can for my part best be described as “training-training-training” with constant advice and corrections from Kimu Sensei. Inappropriate mindset from all of us were commented regularly with the aim that everyone could learn from everyone. A healthy attitude – “The wheel has already been invented”

We trained in different ways to practice different scenarios.

We shot at one stage, against two boards with switching from one to the next with proper body movement.

We shot, while we were moving down from the number of targets, and we also shot with laser guns, this was to train our pull of the trigger (could be clearly seen by the lighting dot, who instantly betrayed us).

Finally, we should go through a process where we, as quickly as possible but still with proper technique, had to go through an IPSC Stage which was laid out. The Stage was to be “run” through safely, with so many “hits” as possible and at the best time.

In my first run, I went completely “John Wayne”; I got a clear admonition to think of what I had learned.

The actual stage run went much better, and I had “only” four misses. I am actually quite proud 🙂

For me this POMW course has been incredibly instructive, not only in terms of shooting technique, but to an even greater degree in terms of the realization of how it is possible to learn the right techniques, the right attitude and not least how much it means to learn from those who have already learned!

“The Wheel must be invented only once”