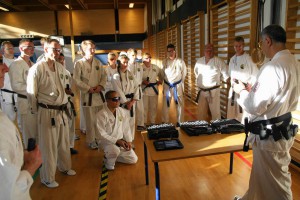 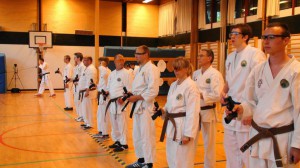 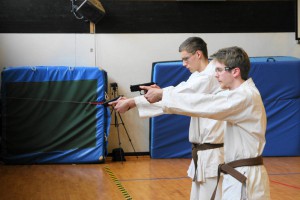 POMW (Project Old Modern Warrior) is a project that started on Friday, January 27, in 2012, with the theoretical part, and proceeded to Saturday, June 2, in 2012. In my case, this project had put a lot of thought true my mind, about firearms in Denmark today.

If we go back to the Friday, January 27, in 2012, it was about the theoretical part of firearms. This review was from the invention of gunpowder. But there was also a comparisons of the former weapons like swords and shields, bows and arrows, spears, etc., And the review proceed all the way to the invention of the atomic bomb and the hydrogen bomb.

We concluded that it is required that we has to be fully clarified with our self if we would kill another man with a katana, much more than if you just had to press a button to wipe out a city. Moreover, Kimu Sensei set up a scenario where we stood in front of a person who was planning to kill us, but there was a gun at our feeds.

On Saturday the 12’ Th of May, we started the practical part after a little part of theory. The course went on in the way that the targets had been set up along a wall where we were divided into groups of 2 by 2. Something Kimu Sensei was very particular with was safety, and we have to use these CO2 guns as if they were real, which was something that not helped very much on the nervousness, and the very first shot I fired at the target did of course not hit the target.
However, the more you used the weapon, the less nervous I became.
After the shooting on Saturday, May 12, we got the lesson to practice properly handgrip for three weeks at home.

Three weeks later, we were consistently much better, and the only thing that we have done, was to practice proper handgrip on the gun, and to practice the count in the head, at the time you have to fire the shot.
When we were good to hit a single target, it was time to move up a level, and here we were going to shoot two goals within a given time. Apart from training to shoot on more goals, then we also trained our eyes.

The next day, which was the last day of the POMW I course, the levels were raised further more.
We should shoot at goal that was standing still, but now we were in motion, both walking back and forth, but also to the sides. At the very end, the entire hall we shot in, turned into a big shooting range, which could remind you of an IPSC track, and it was very fun to try.

Overall, this course has made me feel at peace with myself, and I feel that I am on the necessity to use a firearm in defense.