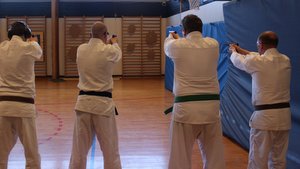 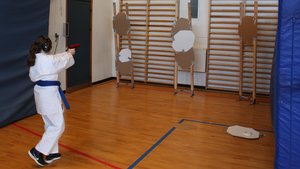 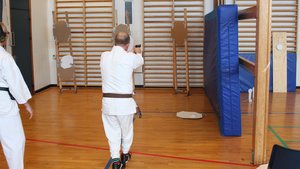 On the POMW I course, all participants were asked in conclusion to write about our experience of the course. My starting point before the course was that I occasionally had tried to shoot in Tivoli and like that, and that was it, I had never handled and held a firearm before. When the course was introduced, it sounded like a very exciting course – it had to be tested.

My expectations to the course was to gain greater understanding of firearms and a sense of accuracy at different distances. As well as learning how to handle a firearm and be able to hit a target in a reasonable extent. In other words – it could not be that difficult!

The course contained three modules. The first module was pure theory, which I will not elaborate on; it can be read about elsewhere. The second part was a mix of theory and practice were we all tried to get guns (air guns) in our hands. We learned about handling the air gun and about what you should not do, (This led to a DQ – a time for reflection outside the shooting range). We tried to hit the targets at different distances, with mixed results. The criterion of success for myself, and some off the others, were to hit the target at all. After the shooting, Kimu Sensei walked around along with the targets in hand, and informed if it was a miss or hit and how many hits, that you have had out of 15 shots, personally I was happy when I just hit the target once. I had to revise my view – it was not that easy at all to hit the target!

We finished the course by getting homework. We had to get our self some kind of firearm; air guns or in lack of better a water pistol. Before the next module, it was up to ourselves to practice the right hand position, the right use of the sight without focusing on a target. We were told to practice half an hour every day.

In the time for course number three, we were all surprised by the very strong development that had occurred of our shooting skills in the time between the courses without even firing any bullets. The success criteria was now the black center of the target commented with a “boo” if you “only” hit just outside the target area.

To be fair it was now also at that time, that we became a little “laddish” – also the girls. It was now the time to shoot and move at the same, that is moving forward, backward and sideways while shooting.

We ended the day with a kind of shooting stage where we had to shoot while we were moving and hit different types of targets. The stage were timed and the number of misses were counted.

What were the benefits of the course?
After completing the course, I have gained knowledge of the accuracy / uncertainty at different distances and it is much harder to hit when you are in motion.
Additionally, I have been focusing on the hand position – what is the probability that an opponent can hit with a given hand position and aiming technique.