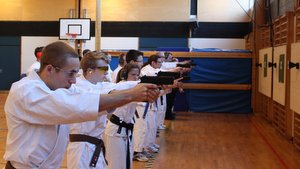 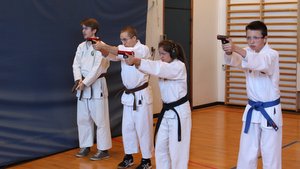 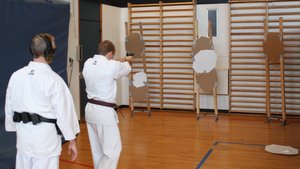 When I first heard about POMW and told that we had to learn to shoot with a handgun, I thought what I could use it for. It is not martial arts like e.g. Jujutsu and kenjutsu, which we practice because we are a multi-track martial arts system.

The first course contained about 3 hours theory of where Kimu Sensei told all about the POMW project, weapons and history so that we had a better understanding of why we should learn to shoot, and why it had to be with a pistol.

After the theory lesson, we shot for about 2 hours with air guns, which shoot with co2 bullets and resembles a real gun but without the recoil.

When the course was finish, I was a bit annoyed because I could not hit anything at 5 meters although I tried to do the things Kimu Sensei had told me.

However, we should then practice our hand position in 21 days for 30 minutes each day because it was the most important thing, if you wanted to learn how to hit the targets, and because Kimu Sensei did the very same to reach his results.

I was a little skeptical about it because I could not really see how it would make me a better shooter and how to get better at hitting the targets.

I thought that the only way that you could be good to fire a weapon was to fire real bullets, one would be better for each time, and not only by practicing the hand position, which is also a little bit boring.

I was then very surprised, because when we had to shoot in POMW I TSM B I could hit the target and it was almost 100% in black on 5m. Just two weeks ago, I could not hit anything and the only thing I had done was to practice the hand position for 30 min. every day for 21 days, so I could see that it had helped me unbelievable well.

I was so excited because it was far beyond my expectations. I would have expected, If I was lucky, to hit the target on 5 meters randomly, but not 100% black on 8.5m or 12 m.

The next day, early in the morning, we should shoot again, so this weekend was almost like a shooting marathon, and it went even better in the morning, when we had shot for about 6 hours as the day before and had learned a lot.

We then learned to shoot on targets while moving and in motion, and it was actually not that hard when you had practiced the hand position and basics a lot.

After a shooting marathon weekend where we had attended two courses in a row, I was very tired, but also very happy for what I had achieved and how good I had become in such a short time.