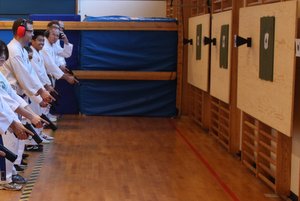 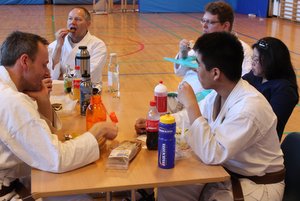 The first thing I can say is, that I did not at any time during the start of this course, expected, we could develop our self so rapidly. From the first time, we had being shooting during POMW I TSM B and POMW I TSM C; there was a clear difference in everyone’s performance. We all agreed that it was amazing how much we had learned in 3 weeks, only by practicing correct hand technique, which is important when you have to shoot with air guns.

The course started like any other course with a good atmosphere among all of us. I cannot speak for everybody, but I was excited to see what would happen, in the three hours that have been planned to this lesson. We had of course been on the Hsing’i A course not so long ago, and the idea of a correct mindset that should be in place, was still very clear in my mind. Not to say that it was easy to stay focused all the way.

We started with a quick recap of the safety rules and of shooting at short distance. Next, we moved further away from the targets. This time it went a lot better, for the most of us, on the 7 meters distance, than it did during POMW I TSM B. We could now hit the targets and some of the bullets had been in the black center. To be honest, I cannot quite remember how far it was at the last distance, but I would say that there were between 9-11 meters. If we thought that it was hard to hit at the 7 meters distance, we were really put to the test now. Not only did we have 9-11 meters distance to the target, but we were also getting “well done” in the head.
As the last training, we were divided into groups of 3. The team should try to shoot with a laser gun. While one group shot with laser guns, the other groups tried all other distances and shot with ordinary air guns against one target at their own pace.
Then came the end of the course about 21 o’clock and our heads were by now well done. We got a little information about the next morning, and what we had to go home and think about.

Although I not had done anything else than study for my exam and the 3-4 hours of training on Friday, I could feel in my head, that I was well done. The only thing I could think about on the way home, in the subway that night were; it will be nice to lie in bed and sleep for a few hours.

Unfortunately, I did not have much sleep. I did not sleep very well that night. Most of it consisted of waking up and looking at the clock and then go back to sleep. Therefore, a restless night with 2-3 hours of sleep and then up at 6.30 am to be picked up by Soren Renshi and off to POMW I TSM C Part 2.

Taken the uncomfortable night’s sleep in view, I felt that I kept the focus fairly well throughout the day.

We arrived in Greve about 1 hour before we started and made ready for the course to begin. Putting tables together, put targets up and right from the start the friendly atmosphere was above us. Therefore, it was not long before we started walking around and teased each other. Everything as it should be and usually is.

Today came the inner “small boy” in us all. Of course, our mindset should be in place. However, it was hard not to let the testosterone flow when you hit the targets and having to empty your magazine. There was still a focus on real shooting technique and incorporating motion.
The first part of the day was spent learning to shoot against several objects. So now, we were faced with two targets in front of us and had to shoot the first one and switch directly to another. It is a lot more complicated than it sounds. For in the movement you change focus, it is necessary to spend 2-3 seconds to get the focus on the new target before you shoot. This we worked on for a while until there was a break.

After the break, we were divided into 2 groups. One half trained to shoot and move at the same time. The other half trained with laser guns shooting multiple targets. In this way, we learned and became familiar with how difficult it is to shoot with precision when you are moving. There was a moving pattern toward and away from one target and sideways when you moved past several targets.
Then, having half of us shooting with air guns on small metal plates while the other half would shoot at multiple targets at different heights with laser guns.
Since each half had tried their post a few times, there was one exercise back. An IPSC stage had been made where we had to move and shoot at different hights and on small objects. This was the last exercise we did in POMW I TSM C Part 2. Although the track was relatively short and “simple” (in the sense that we had been through everything before) it was still stressful to go through.

My experience of POMW I TSM C is that it was a cool course, which I would not have done without. Mentally, I thought it was something of a trial to be able to keep the focus for so many hours in a row. However, never mind constantly. The more you practice, the more it strikes you that the mindset is essential if you want to develop yourself.

The whole POMW I course has been interesting and I have a feeling of not being able to wait to start on the POMW II course.