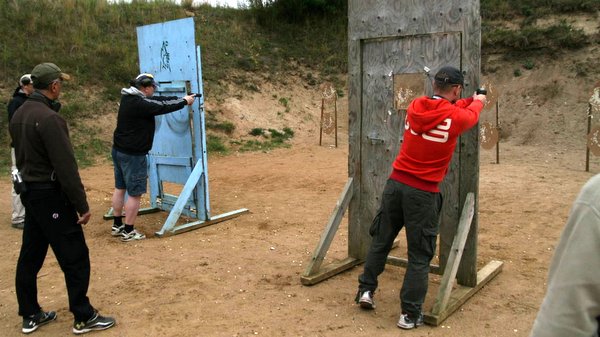 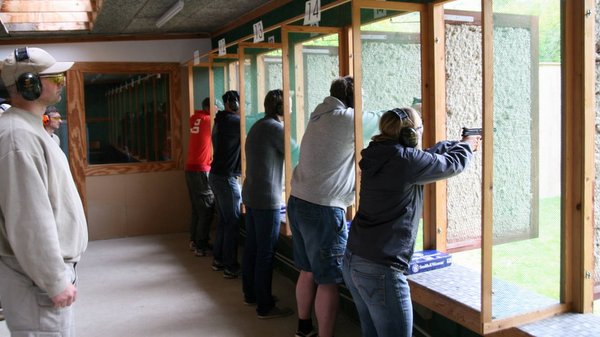 Was Lucky Luke a Jokokan student? I will try to answer that question, as well as describe how it was to participate in the ‘Project Old Modern Warrior III’.

After completing POMW I (shooting with softguns) and POMW II (shooting on a traditional shooting lane with a 9 mm pistol and a 0.22 caliber pistol) my expectations for the POMW III were very high. POMW I and II had given me a thorough introduction to shooting with guns on a lane as well as given me some eye-opening experiences with regards to shooting at targets with points.

The first shooting was scheduled for 1. September. Prior to that we had spent one week dry training, primarily by lifting weights with a stretched arm and by practicing at aiming with a softgun. It is indeed quite hard to keep a 9 MM pistol quiet in a stretched arm and it is pretty hard to keep both eyes open when you have learned something else for 10 years. There was a total of three days of shooting allocated for the POMW III and they all took place in September in excellent weather conditions.

All the shootings took place at Hanebjerg Shooting Centre, more specifically in the ‘hole’ . This unflattering term for a shooting lane, covers an old gravel pit, which most of all resembled a backdrop to an old western.

We started each shooting with a repetition of how to handle a 9 mm pistol and when everyone felt comfortable with it, Kimu Sensei told us of the upcoming shootings. Common for all the shootings we carried out was that we now no longer we standing on a traditional shooting lane with a decent distance between us, nor did we have a small wall in between us, and we no longer had a neat and tidy concrete floor, but now we were on a shooting lane with nothing but natural enclosures, a gravel surface and with the risk of having your partner’s empty holsters in the head. Just fantastic.

In spite of the fact that we were outside a traditional shooting lane, the security was in perfect order, and there was an expert guidance from both ground commanders and shooting instructors along the way.

For all the shootings we had prepared between 2-4 magazines, and there was therefore ample opportunity to train recoil control (habituation to the gun’s recoil and to how you as soon as possible after the previous shot, get a correct aim), ‘reset’ (next shot fired immediately after the previous without releasing the trigger), firearms control and to habituation to foreign commands (they are used when you are ‘off-road’ in the shooting world).

It was obvious to all, in the course of the three days of shooting that we became more and more familiar with the weapons and significantly better shooters. Statistically 90% of the participants were at the Danish Division marksman level (4 of the shooters on the Danish 1st division level) and the rest not far below. My shooting also developed over the three days. Since I have never had problems with either firearms or loud bangs, it was not the adaptation to this that gave me challenges in the first days. My challenge was that it was necessary for me to keep a constant focus on the POMW shooting technique – and to forget what I had learned in the past about shooting. It was only on the last day when I relaxed completely during shooting and where I focussed one hundred percent on the POMW shooting techniques that I had the best rounds of shooting ever. So as I completed the POMW II with an eye-opening experience, POMW III left me with an ‘out of body’ experience. I felt that I had moved from being an average shooter to a good shooter (in just three days of shooting with live ammunition, some aiming practicing as well as weight training here and there) – what a feeling.

In the three days combined I fired over 1000 shots which is more than I have shot during my time in the armed forces. It should also be noted that this time it was 1000 shots using the POMW shooting technique. Had I known this technique back then I would probably have received more than my silver brand for my shooting.

Well back to whether Lucky Luke was a Jokokan student. Perhaps I did not get wiser on this one and I can therefore not give you a clear answer (but does it matter?). One thing, however, is certain: he would definitely have benefitted from us Jokakans, if he like the rest of us would have been able to put his ego aside, commit a 100 % and be open to criticism and learning.