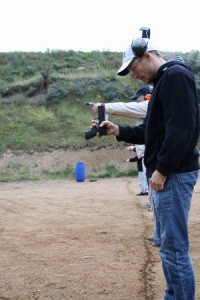 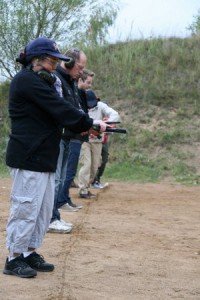 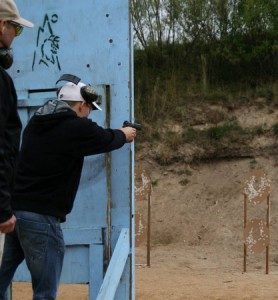 I was very excited to get started with POMW III, since I was already a great fan of shooting 9 mm, and I knew that we would almost exclusively shoot 9 mm, and that it would take place outside in ”the hole” with IPSC targets, so I almost could not wait. I had also practices 20 minutes a day, doing dry training and lifting hand weights. We had been told to do so, since it is very important, to achieve a good result, and to improve optimally.

The first time I shot at ”the hole”, Kimu Sensei went over the procedure and safety when shooting IPSC at ”the hole”, since we don’t stand within the set frames that we normally do, when range shooting. So safety was even more a focus, than normally. There after we dry trained and went through the commands, since they are in English, when IPSC. When the shooting started, it actually went pretty well, and I could feel that the dry training had helped a lot. You could really feel a difference with the recoil, since I had no trouble holding the pistol for many hours, and I almost did not even feel the recoil any more. I really started enjoying the shooting and could much better concentrate on the POMW correct shooting technique. The dry training had given much strength to the arms and back, so the body was used to it. The first day, we only shot about 4 hours, so it was not so bad, with all the dry training that had been practiced. But we learned a lot of different commands, and some new ways to reload, where you show your control of the pistol.

The second day, we shot for about 8 hours, and here you could really feel it, but even so, it went better than I had expected, and we learned things like, reset, where you slowly ease up on the tricker, after firing, until you feel the click, and then you pull again, because this way you learn how to shoot really fast.

There after, we shot at 2 targets, where one was low, the other high. It was smarter to begin with the low target first, since the recoil from the pistol automatically presses the gun op towards the second target. At the same time we practiced shooting with rhythm, e.g. if you have to shoot 4 shots at 4 targets, the time in between shots should be the same, because it has been proven to be faster this way, when shooting at several targets. It is not faster to shoot 2 really fast shots, at the first targets, wait a little, and then shoot two really fast shots at the other 2 targets.

Then we shot at 2 targets from left to right, and reverse, and it was important to use your hips when turning and keep the same rhythm in between shots, and here it was important that you stood as if there was a piece of paper under the heels, as you of course always do when shooting. When we shot it went well, but many of the shots at the second target ended up a little to the right if we started out with the left, because you might focus more at the first target than the second, or you might shoot to fast.

It went well the second day, and you could really feel that you had shot for 8 hours, and had a lot of benefit from the day. But if you had not dry trained, it would have been to hard. You also would not have benefited as much from the day, we really learned a lot of good things.

The third day, graduation day, where Jens Hanshi-dai was the primary range officer, since he was being educated, we shot for about 8-9 hours. We shot close to 350 rounds of 9 mm, and it went really well. I could feel that I really enjoyed it, even though it was many hours.

We started precisely on time, with a little dry training. Then we began shooting at a target at distance 7, 10, 15 meters, and we shot at targets low and high, and from left to right, at all distances.

We were fast, since we had a really good Range Sheriff, so we also learned to shoot around an obstacle, where we shot while standing behind a barricade, at a target on the other side.

Finally at ”the hole”, we shot from 45-50 meters, and here you could really feel that the POMW shooting technique is very important, or you would not hit a gosh darn thing 🙂

When we were done at ”the hole”, and had eaten our lunch, we went to shoot range shooting, where Jens Hanshi-dai had the command, since he was going through the Range officer education. We only shot with 22 caliber, and it was really strange, because it was like shooting with an air gun, now that you were used to the 9 mm. First we had to find our aim point, analyzing our own spread on the target, to find the correct aim point, since all the club guns are different. After that it went pretty well, even though I was a little irritated shooting with the 22. I used a long time finding my aim point, and I had to almost aim all the way down on 2 and some to the left, before hitting the black in then target. So I much better like, shooting with 9 mm, since all you have to do, is aim for the black, and you get a hit.

Other than that, it went well and we passed POMW III, and Jens Hashi-dai passed as range officer. I personally think that I gained a lot form the course, and learned a lot of good things in IPSC and I got really good with the 9 millimeter.