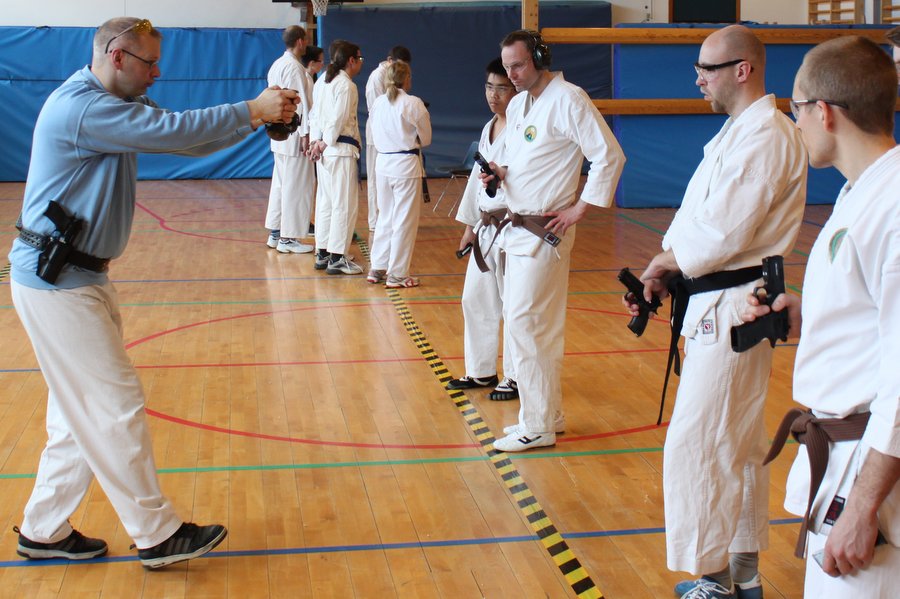 I had been looking very much forward to the POWM courses, just as I did to the hsingi course. I was curious to find out what we would learn and I expected that handling a firearm would be part of it. The day began with a theoretic part on various types of firearms as well as an introduction to some basic techniques with a pistol. It turned out that there are many similarities between our karate basics and these techniques e.g. how the posture is in different positions when shooting. At the end of the introduction we watched a few videos of some very skilled IPSC shooters. They were extremely fast and I could not help thinking that Lucky Luke would have been slow in comparison.

After a thorough introduction we were to try what we had learned in practice. We were to shoot with the airguns of Honbu Dojo after targets 3, 5 and 8 meters away. I quickly realised that shooting is more difficult than it looks. What to do when things are not working properly? Well you try to remember what the shooting manual tells you: both eyes open, the legs placed correctly, the position of your hand, the recoil control, the use of reticle, your breathing and vent. Once all that is under control, all you have to do is concentrate on what you are doing, and NOTHING else before, during or after the firing. This will enable you to fire correctly and to ensure safety for all. The rest of the day was spent shooting and practicing the techniques, but despite it went well, I felt something was missing. To end the day Kimu Sensei asked us to practice for half an hour every day the following 3 weeks. As I did not have an airgun I had to go shopping for a toy gun.

During the three weeks I had practiced a lot. I was therefore very excited when I arrived at Tjørnelyskolen in Greve, where POMW C.1 was taking place. The course continued where POMW B ended. At first Kimu Sensei asked how much we had practiced and then he made up some teams accordingly. It turned out that what I had been missing was some more practicing and some routine. The shooting went well and I could feel that the practicing I had done paid off. We shot from different distances and within certain timeframes as on the POWM B course. It is incredible how three weeks of practicing, even with a toy gun, can improve your shooting significantly. As it was getting late the shooting went really well and I felt more and more confident with the airgun.

Then the time came to aim at two separate targets. In practice it meant that we were to aim at one, turn and aim at another. The move we had to do was the same as the one from Shohi level 1 i.e. look first and then turn. It was a great exercise, as there were several targets as well as time limits. I improved over time and the day exceeded my expectations by far, perhaps because I did not really believe that practicing with a toy gun would make much of a difference. I can only say that you should never underestimate toys from ‘Fætter BR’. I was very pleased when Kimu Sensei praised all the participants and said that we had surprised him favorably. The day ended with a good feeling and a tiredness caused by our concentration during the course. Even if I was exhausted when I came home, I couldn’t help practicing with my toy gun: I guess that I am bit of a punk.

The following morning we started early so that we could help preparing for another day. As the previous day had been so amazing I had huge expectations. I anticipated that my shooting would be just as good and that the speed would increase. I was not let down. On the Saturday my shots were good and the speed has accelerated. We were allowed to shoot at several targets also while moving. The previous days we had been standing still while shooting.

I found that moving while shooting was difficult, but also here we had some stored learning. I learned that our basis is decisive and that it all is connected. I realised that I had to practice a lot more with my Jo, as it would help me in this connection. We did several different movement exercises on the last day. First we moved straight forward and backwards while firing. Then we moved sideways both walking and then running while shooting. We also become acquainted with the laser guns, that we used for larger distances.

At the end we were to run through a trade lane similar to the ones we used during my military service. We were to get through the lane as quickly as possible with as many hits as we could manage. There were 26 targets placed high and low, and we had to change the magazines so we were put under a lot of pressure. It was very funny and for a brief moment I felt like James Bond.

From my perspective it was a very different, but funny and educational course. It is thought provoking how your karate basics can be used for essentially everything and how much you can learn in such a short timespan when you learn from the best and possess the right attitude.