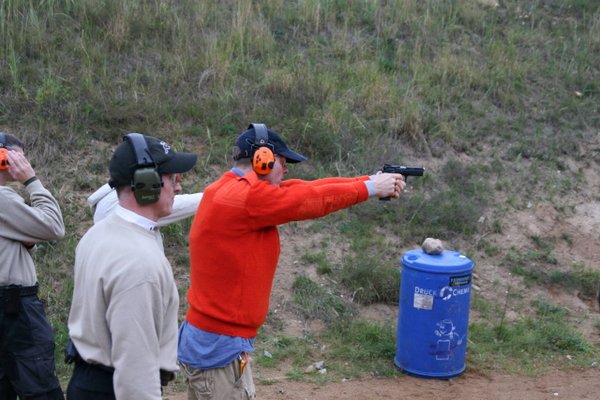 ’Shooting in the Hole’ with 9 mm – Zone-/Military’ – shooting

Shot initially at single targets, first one, then two and then several shots in a row. Then transition between to targets. Trained and shot two magazines, each at increasing distance at stationary targets. Shooting at 7, 10, 15, 20/25 m.
– Alfa zone (unprotected instant kill)
– C-Zone (deadly or critically injured shot)
– D-Zone (wounding shot)

Shot transitions, up and down, side to side. Totally about 360 rounds. I shot initially about 80% and then 90% in Alfa-zone.

Transition up and down, side to side. Tendency to pull past in the second shot.

1and 2 transitions (2 or four shots). From side to side: Right hand starts in the right pulling towards the left (left hand opposite). Is of course trained opposite/reverse, down and up. –Recoil pulls from the bottom and up – start with it – remember to aim with second shot too.

Important to be patient, constant split and flow – so you could repeat quickly, safely and precisely – as in Yakami Shinsei-ryu. Also shot at 50 m targets (large and small) with Magtech F (extra tightly loaded) ammunition.

Self – evaluation:
During the shooting from standing to stationary target at ’the hole’, I learned again the importance of taking responsibility for my self and others, to recognize that I and others have a challenge to solve, and felt over all that I had a good working relationship with Karsten Shisho and Jens Hanshi-dai.

Learned that I, before shooting didn’t have full believe in my self, and my ability to get a hit. It’s about believing in your self – a must. To be able to believe in others. 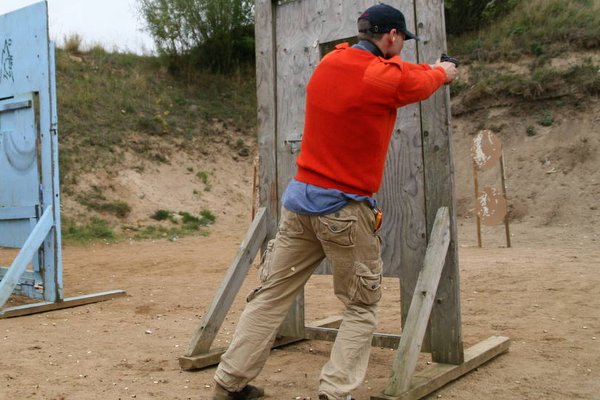 Team work during clean up, made it fast and efficient. We followed clear commands from the Range Sheriff – very satisfying.

Evaluation of the Range Sheriff –follows the principle ’praise-critique-praise’

1. Good preparation (demonstrated humility for the assignment). Had made a detailed plan. Well in charge in relation to goal and content, as well as time schedule and assignment of chores.
2. Clear instructions/commands from the course leader and shooting instructors. Took charge.
3. Correct completion. Demonstrated good situational awareness, and completed according to plan with small necessary adjustments, and gave supporting instructions.
4. Good delegation of duties – maintained the role of leader – took responsibility for self and others so that the students might grow.
5. Kept the time and goal – plan, making necessary small adjustments underway and corrected due to unforeseen events. ’Adapt like water’.

This all maintained safety (ease) and value.

Cleaning and maintenance of the gun (weapon). Fun and giving to clean the gun yourself – simple construction of CZ Shadow – can shoot 1-2000 rounds before it has to be cleaned. Can easily shoot 100-200.000 rounds – work horse. Used by Special Forces all over the world.

Ego versus cooperation – did not pass, or perhaps just barely.

Shot 10 rounds to set the sight. There after 3 times 30 shots, where it was about learning from your own mistakes by self evaluation. Setting of the sight : Shot for spread, up and down – breathing, and adjusting to precision shooting. The first 10 shots was not enough to set the sight. Shot better and better, getting a smaller spread, all though a bit to high to the left – setting the sight.

Learning:
To recognize when I got excited and shot above ability. Important to quickly find the center, calm, correct basic shooting technique (POMW hand book with hand position, how to aim).

Good results due to focusing on the good process with attitude and good dry training preparation.

Was 22. September much less tired both physically and mentally, than on September 1 or 8. Could hold the gun and concentrate about safety, basics, train and learn.

Self- evaluation:
’Did pretty well’. According to Kimu Sensei. Had a tendency to in short moments, not completely follow instructions. Apparently I testing own limits, shooting above ability, and thereby not keeping constant split, thereby being slower. Honestly, I shot the first 8 of 30 shots, 4 at the time, in the first and second of three series. I should have shot en and max two consecutive shots with 22 mm – that was the instruction.

Apparently I give myself a certain egocentric allowance, to let go of self control and self discipline, and sometimes I am to smart for my own good, and have to reinvent the deep plate. But that is truly not smart J

On the other hand, I had consistent good groupings. I ’lost’ points by not aiming down and to the right enough. Actually thinks that I truthfully could have a score equal to 1. Division, with my own gun – but that is easier said than done, so I have to train and prove this.

Experience has shown, that a person quickly becomes rusty, but also quickly can train to reach earlier skills, especially if the competence is maintained, by dry training once or twice a week.