Then it was once more time for a group of shooting crazy Shindenkan’s to meet for a round of POMW (Project Old Modern Warrior). Fun set a side, then that is not exactly what we are. Rather we are a group of normal people, trying to make what we do count. As with other Shindenkan courses, POMW is a professionally planned course, which means that all the attendees show up with a good serious attitude. Although it is still combined with the good mood, which follows, when people who know each other gathers. This is especially important in this case, since POMW is about the use of firearms, and it is important to keep things like safety at the highest level. And if people don’t feel comfortable when they handle firearms, then the safety risk would quickly rise. Or as Kimu Sensei told us, ”it is important to enjoy the shooting. Or else you will not shoot well.”

POMW III is primarily about ’practical shooting’. Which means, that while we at POMW II focused a lot on precision and mainly shot on the range with caliber 0.22, then POMW III focused on shooting at different distances, at more targets, and with series of shots. We almost exclusively shot with 9 mm, where control of the recoil matters much more, than it does with lighter firearms.

And actually we shot a lot of rounds. A little more than 1100 rounds in all, which is adds up to between 5 and 7 years of normal experience shooting (if I remember correctly). And if I thin back at how it felt to shoot the 9 mm during POMW II, then I can easily say, that I have improved. Back then it felt like the shots gave little chock reactions to the body, and your muscles quickly tightened up in a wrong way when shooting. Precision was more luck than skill, and I even managed to hit the wooden board next to the target back then. It’s called ”fear of recoil”, and it can take some adjustment to get rid off. But that was then. Now, I can shoot through a hole magazine at several targets, and still get a relatively small spread, or almost consequently hit a smaller metal plate at a distance of 40-50 meters. It is still much harder, shooting the 9 mm precisely, compared to the 0,22. But following more than a thousand round, the ’fear’, is almost gone. Then you must remember to use the good technique which we learned in POMW I and II. 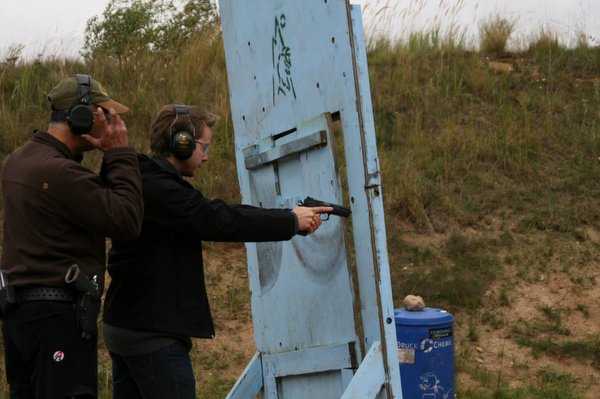 So, the results were there, but it had of course demanded a lot of work beyond the shooting or ’wet training’, as we call it. Just as in the earlier POMW courses, all the attendees had performed a lot of ’dry training’ at home. This means that we had practiced POMW shooting technique at home. And in POMW III we also had trained with 2 kilo free weights, to be able to shoot for such a long time. 2 kilo is about what a loaded cz Shadow weighs, which is what we were shooting with. Further more the extra strength can also make it easier to handle the recoil. Even though you are not to fight the recoil (not possible), then it can help you hold the gun correctly. Which can result in, a faster return of aim, to the target, following a shot, recoil control. If you are reading this, in preparation for a coming POMW III course, I will give this advice. Dry train as much as possible at home. At the range you do not have the time to think about your hand hold or technique, so if it is not already muscle memory, then problems will keep coming.

We also had a few surprises, like when there was time enough left, for us to shoot around a barricade. It really just meant that we had to lean slightly to one side while shooting, but as Kimu Sensei said at the time, then little changes like that, would not bring us out of balance anymore. An interesting thing that we did, was to return to the range shooting we had done at POMW II, to see it we could still perform precision shooting with 0,22 caliber. This should feel like shooing a toy gun, after shooting with the 9 mm. Personally I probably shot the same as my best results from POMW II or a slight bit better, just more consistent, and yes the weapon did not feel like much. We had not practiced precision at all, and we only got 3 tries to deliver 30 good hits. The result was, that the attendees shot a little better than they had done at the end of POMW II, and a few reached an impressive result, equal to 1. division Danish standard. Actually everybody shot at Danish division standard, meaning competition level, but it honestly did not feel like much.
What you realize is, that shooting is not all that complicated, and following a relatively short training program, you can reach really good results, as long as you train in the right way. You can say, that we now shoot at ’black belt’ level, but with the same level of training, we could have reached about 8. kyu in martial arts. That gives a pretty good picture, but for us it is not so important. From shooting, we take with us what we can use, and then it is about recognizing the world for what it is. It has definitely been exciting and fun, and a good ’eye opener’ in relation to how you can use your martial arts training to quickly excel at something in the modern world. But, the truth is, that shooting is simple, so you can quickly become a world champion, in your own little village. That may be fine, for many. But for us you can choose to look forward to the real challenge, which still exist in the martial arts.