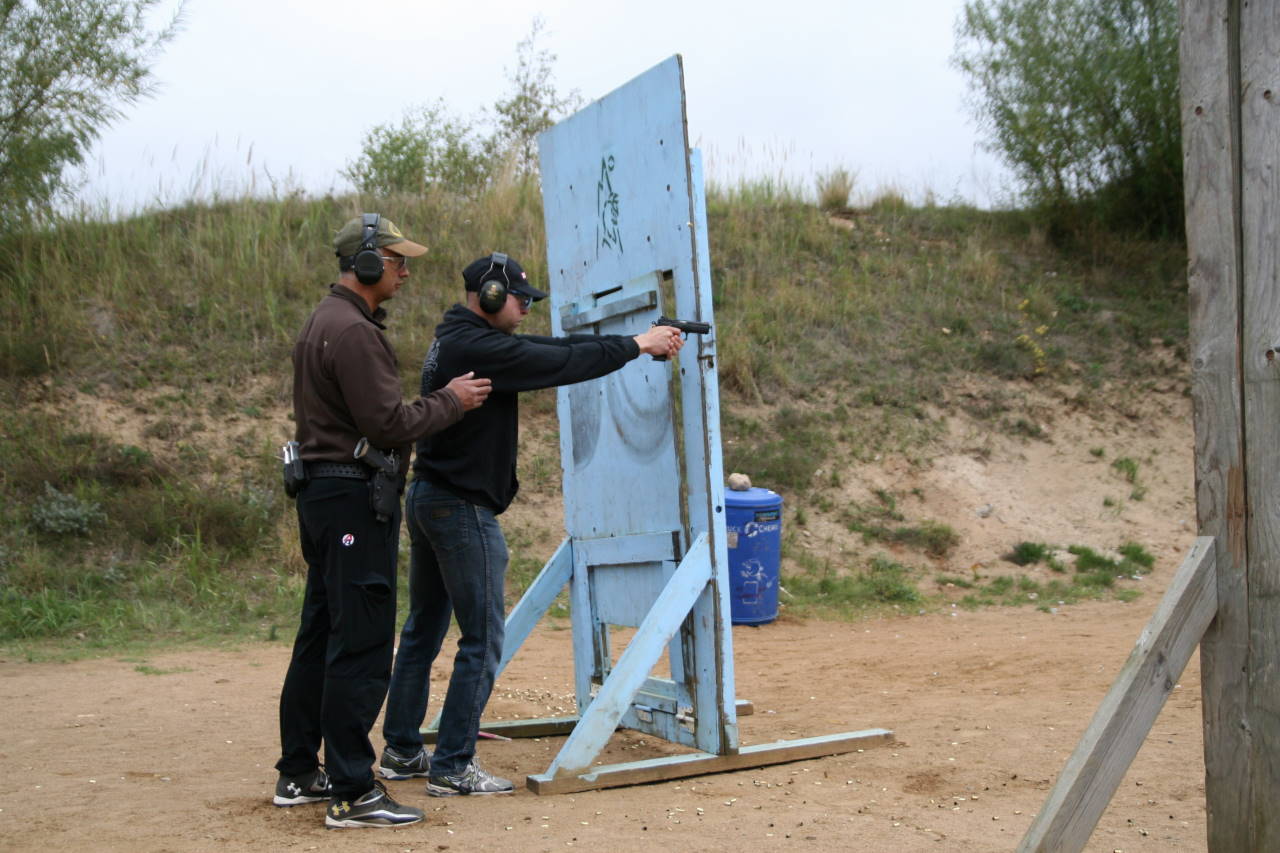 POMW – what is it? It is a course where you learn to shoot and handle a pistol. Without going into a discussion I will have to confess that I do see the relevance of this course. To me it is about survival and the best way to survive is to possess many different skills. If you were to be attacked by a person with a pistol what do you do? And what if YOU suddenly get to have the pistol in your hand? Well more about this later.

I would like to begin with expressing my gratitude for being on all the POMW courses. Before attending I had thought that it could be cool to try and shoot with a real pistol and now was the chance. When you start training the various techniques, shooting becomes a lot more interesting. I would never have thought that I would be shooting at several targets while moving, nor that I would be shooting around barricades.

On POMW I we gained a general knowledge on how to handle a pistol. We got familiar with the POMWs technical shooting manual and on this course the emphasis was put on the technical training. Besides the technical training, safety was a major issue during all three courses. On POMW II we moved from airguns to real pistols and we got to shoot with live ammunition, mostly 0.22, but later on also 9 mm. I did not feel any real difference between the airgun and the 0.22, but shooting with a 9 mm was certainly a different experience. It made a very loud BANG and recoil control suddenly got a new meaning.

Now the time had come for POMW III. Something, however, was different compared to my other Shindenkan courses. I am usually either excited or pleased, but this time I was very nervous and my stomac did not behave. All I could think of was ‘what is going on’?

What was going on, was that I on POWM II hadn’t managed to get familiar with the 9 mm, and I found it very uncomfortable to pull the trigger. In the morning I was terrified. I was afraid of the 9 mm and I had no idea how to handle it, despite several instructions on the issue. In reality I had been afraid of the 9 mm since I heard the first shot on the POMW II course. Perhaps that was why I had considered skipping POMW III. When this thought came to me, I realised that this was the reason why I should participate. I therefore decided to put my fears for the pistol aside.

It was easier said than done, and I tried to figure out what I could do to reach my goal. As it turned out the answer was in our curriculum. It is as we say and think of the students, meaning ’We believe in you, but you also have to believe in yourself’. This helps obtaining the attitude called ‘I will not give in to my fear’. Should this not be sufficient, you can always turn to the words of Kimu Sensei: ‘you can so much more than what is required from you and others’. I do not think that I would have joined the POMW III if it wasn’t for the other chief instructors and Kimu Sensei. Their professional approach to the firearms and their constant focus on safety made me feel secure. This was just what I needed, and it was wonderful to have somebody by my side.
All I had to do was to start shooting until the fear would disappear. It is no secret that it took me many shots to become familiar with the pistol. Only on the last day of POMW III I felt comfortable with it. To me the most important thing was that my fear disappeared and that I now know what it means to fire a pistol.

POMW has taught me what it means to handle a pistol, and to be able to see if others can as well. This will help me if I one day should find myself in a situation where all my skills are needed. POMW has also given me the opportunity to face and overcome my fear. POMW has confirmed that you need to believe in yourself and that you need to have faith in others. A combination of this will lead to a clarification of how far you are willing to go, but also that it could be necessary to pull the trigger in order to defend yourself and your family. For me it is easier to make a decision and be serene about it when I know my capacities as well as limitations. In order for you to be calm when using a pistol you have to know that it is a ‘one stroke – one kill’. I found that this course, just like the other two, was very interesting. Should anybody ask me whether I regret having participated in POMW III I can truly reply with a smile and say ‘not at all – it was just a step up’.

After the POMW courses I do not feel that I have shot that much with a pistol. There is certainly room for improvement and to sharpen my techniques. Despite the limited time that I have been shooting, I am surprised, that once you have put your fear and insecurities behind you, how relatively easy it is to shoot with a pistol. Considering this short period of practicing shooting and the results obtained, I am convinced that a bit more practice will improve my results significantly. This is, however, something I cannot just do while being graduated in Yakami Shinsei-ryu.