The final weekend arrived, where 5 Chief Instructors from Shindenkan, were to demonstrate that 5-7 months of work, could result in a DIF DskylU DSF A-shooting license, and a 1st and 2nd ranked for the weekend course. IPSC stands for, International Practical Shooting Confederation, and is a competence that gives grounds for discussion and self recognition.

What do we need it for?

Yes, dear reader, we live in the year 2012 and can you create a full picture, if you only look at the past? No, you have to include the present. It is the same with our competences. If we only use competence from the past, then we will not be able to create ”a full picture” in Shindenkan. And we really want to create whole and happy people.

The whole idea with happy people, is something that really came true during this weekend’s IPSC safety course. Perhaps normal people think twice, before moving out in rainy weather, in the mud. But not Shindenkans. Because you can never get so wet, that you can’t dry off again.:-)

When all the Chief Instructors arrived at Hanebjerg Shooting range at 08.00 Saturday morning, primo October, 2012, it had rained heavily all night, and it kept on till around 10.00. Perhaps it stopped raining at that time, but Hanebjerg Shooting range was at that time transformed in to a mud bath, that would surely had been a hit, if at the same time it had hosted a mud wrestling competition for women. But not this weekend.:-)

The Saturday began with hot coffee, a piece of bread and an introduction to the attendees and the Instructors. The Chief Instructors from Shindenkan have all been shooting sporadically for a couple of years and have for the last 5-7 months been serious with the shooting 1 to 2 times a week. The rest of the attendees at the course, all had between 7 and 30 years of experience and it was a mixed group with people from the police, firefighters and one life guard.

The course was an obligatory part of IPSC. If you can’t pass the course, you may not shoot ISPC. The course is a safety course about how to be safe and keep the safety rules on an IPSC range. How to make sure that you do not harm yourself or others while charging around an action course to shoot at targets, which you must hit precisely to receive points. It can sound difficult, and it is, if you don’t know what you are doing. To shoot a gun, is not just about pulling the tricker. It goes deeper, like a person’s inner self resolution. Oh. Now it gets deep. Well, not really actually. But it is not easy to shoot a gun, and hit something at the same time. It is not at all easy, if you don’t know how – and all the Chief Instructors do:-)

Following the morning briefing, everybody went to Hanebjerg IPSC range, called ”Hullet”. Perhaps renamed ”The mud hole”, following that weekend. It was actually not so bad at ”Hullet”, but a little further away, was another place, a little smaller, but also used for IPSC. In between these two ranges was a road which was totally muddy and filled with water. 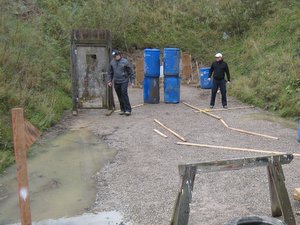 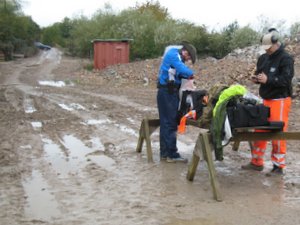 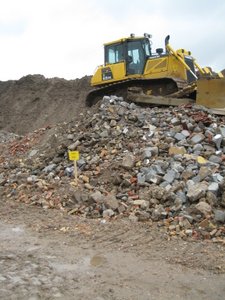 At IPSC they make a big deal out of telling people, that it is a sport, and that it is only in peoples crocked minds that IPSC is about something else. Perhaps it would help, if they renamed the places, and gave them names which do not put the fantasy in overdrive

The course was begun with a stationary round of shots at cardboard targets, from a distance of about 7 meter. The Instructors had to see if we could hit the targets, before we were unleashed on the rest of the range. Following a lesson in shooting technique, we were divided in to two teams, with four on one team and five on the other. This course had one team leader and four instructors. Two of the Instructors were in training, but they did very well.

Every team got their own ”hole”, with tracks build giving possibility for safety training in IPSC. As the day progressed the remaining rounds grew less. This resulted in the need for a few to dig into their own stock, to have enough for the course on Sunday. All together each person shot around 600 rounds during the course. So it was not only the thick rain, which hung heavily over Hanebjerg. The cloud of gun smoke was equally heavy. 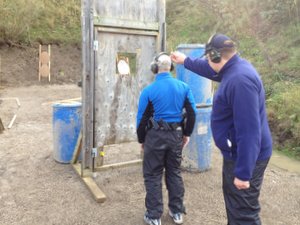 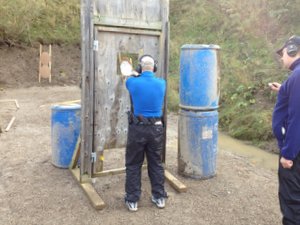 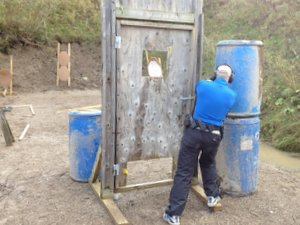 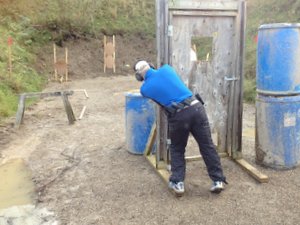 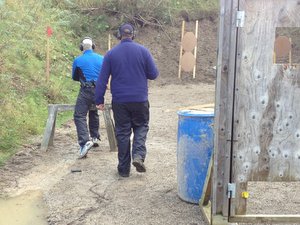 As Saturday progressed, the construction of the tracks became narrower, with respect to safety angles. In effect they became smaller and smaller and you had to concentrate, not to be disqualified. This was ok during the course, but during the exam on Sunday, a disqualification would mean, a farewell. So you pulled yourself together and increased the level of concentration. When the program for Saturday was over, we were given the information, that we had been so good, we had also completed the program for Sunday. Can it be better, then we could repeat all Sunday, before the big exam:-) 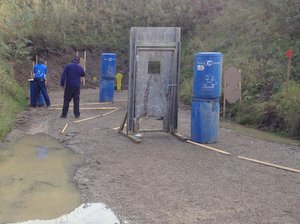 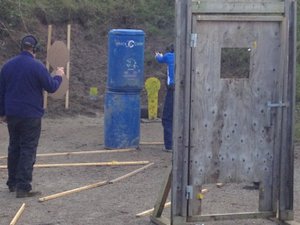 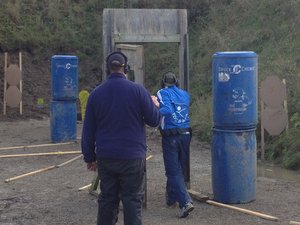 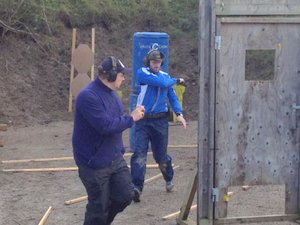 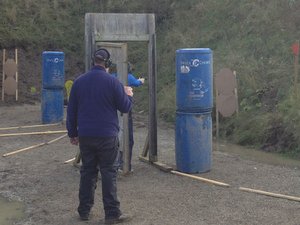 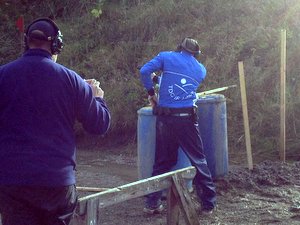 The forecast for Sunday was not better than for Saturday. Rain and mud all morning. When we again stood on the range dressed in rain gear, a peaceful relaxed mood had fallen on the group. It seemed like everybody enjoyed being at the course and learning all about safety rules. The setup of the ranges became more and more difficult and while you had to watch out for safety angles, you also had to keep a flow and technique during shooting, so that you did not use your energy in the wrong way, which could result in decreased shooting performance.

At a point the safety angles got so narrow, that you were afraid to move. But it was only good. You learned to decide, how best to move on the range, and not lose your margin of safety. It gave everybody a chance to become ready for the final exam.

At high noon on Sunday, the learning part of the course was over, and the time for final exam had arrived. An exam that involved four different ranges to complete without disqualification. At the same time the course leader would pull you aside and ask questions, testing your knowledge of the set of rules.

Before the start of the final exam, it was time for lunch. While chatting away food was consumed in large quantities. After lunch everybody got ready in their own way. While some walked around burping, others readied their equipment. When it was time, we were all brought back to the ranges, to the same teams we had trained in during the course.

The first stage of the exam involved cardboard targets, plates and a door to shoot around. Not the biggest challenge, but still exciting and a good start. Next stage had a row of cardboard targets, and shooting through a door, to hit a steal target, while not crossing a line before the steal target had been hit. And finally a row of cardboard targets on the right and the left side. All the while you had to change magazine, or you did not have enough rounds for the whole stage. Stage three was similar to stage one, except it was with ”weak hand”. Which means that you had to shoot with the hand you would not normally shoot with? And since everybody shot with their right hand, then the stage had to be completed shooting with the left hand. That is a challenge, but everybody completed without being disqualified. And even with a stage winner in Martin Renshi, who got what is called a double Alfa, all the way on the stage – it does not get better 🙂

Fourth and last stage was somewhat of a challenge and an experience for all. The start position was sitting on a chair with all the magazines in a drawer, and your hands on the table. At the start signal, you had to put the magazines in the belt, and begin shooting. Here there were elements such as steal targets to shoot and one NOT to hit. Shooting lying down, running backwards with the gun and once again shooting through doors at a steal targets from behind lines you could not cross. A stage which really tested all which had been done during the course. Nobody got disqualified and it was a group of very happy and tired shooters, who after cleanup gathered at the clubhouse for feedback and handover of the shooters license, which was only temporary. The thing is, that you have to completer two matches without disqualification, for the license to become permanent. You can also take an additional 25 questions, then there is a plus on the license card. 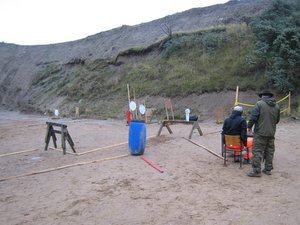 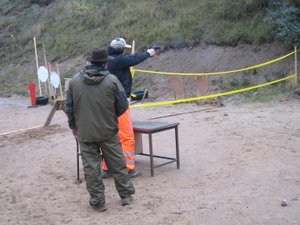 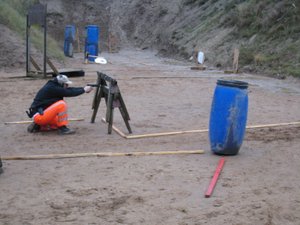 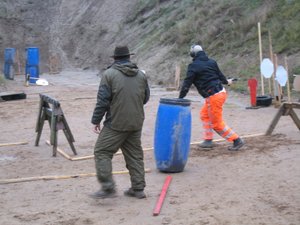 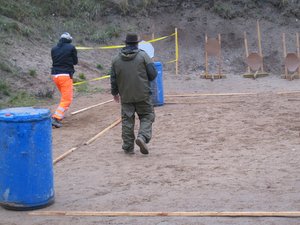 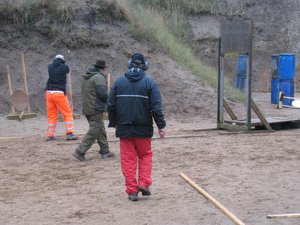 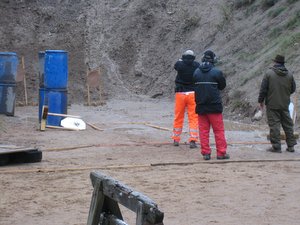 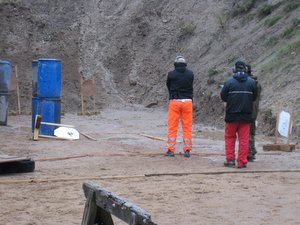 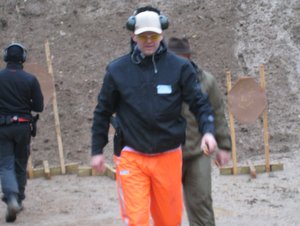 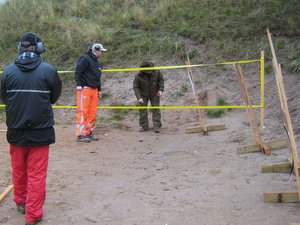 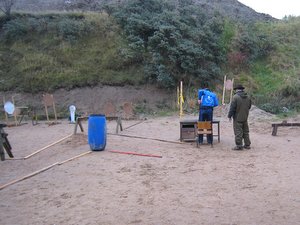 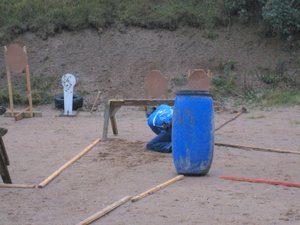 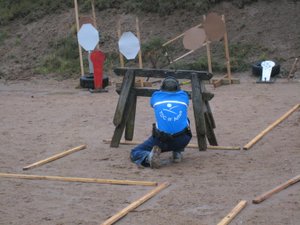 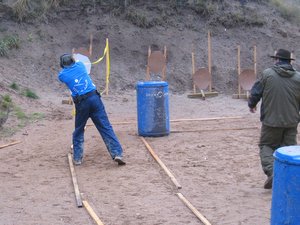 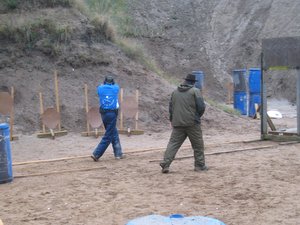 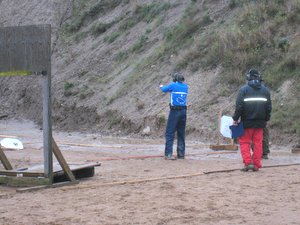 During the final exam, the points were kept track of, and the time taken to complete the stages, was also noted. So that later you could see how well you did compared to the rest of the shooters.

The purpose for the Chief Instructors was to complete the course, without getting disqualified, so that we could use this competence while training new shooters in Shindenkan. But that we should take the first and second spot as well as 5, 6, and 7, was a surprise. But where there is will there is a way. The results speak for themselves.

So even after 5-7 months of training you can better people with 30 years of experience, if you receive the right kind of training. And we did, and still do. Everybody in Shindenkan knows that nothing is left to chance when it comes to our training and teaching. This is also true of our shooting in the POMW project, and it will continue in the future. Remember that it is the person behind the weapon that makes all the difference. Because it is the person pulling the tricker, it is the person taking aim at the target. No matter whether the price of the gun is 5.000 kr or 30.000 kr.

Epilogue; All Chief Instructors attended there after IPSC level II and III, 2-4 matches and got their DIF A + license. Kimu Sensei passed in April 2012, his IPSC RO – Range Officer, IROA level 1 license, and have since been shooting some RO in over 20+ matches on four continents and from level II to level III.