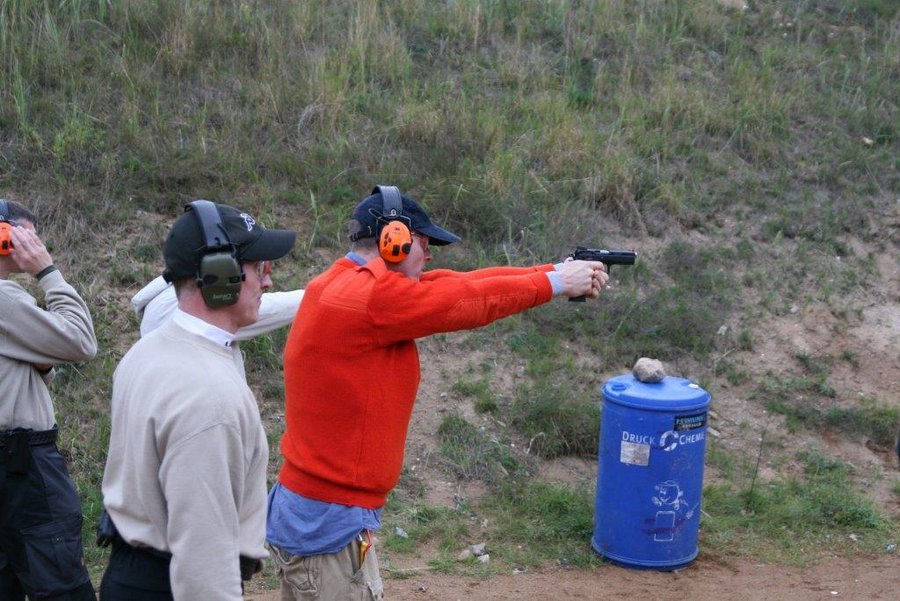 The time is approaching, where 5 of the Shindenkan Chief Instructors are to prove, that the last 10 – 12 months of work with POMW gives results. The results on a normal range shows that we are shooting at the level of 1. Division, according to DDS and DskyU’s demands. But the real goal to be reached, is the Formel 1 one shooting – IPSC.

It is one thing to stand still and shoot, having all the time in the world to take aim. Quite another to shoot in motion, where the shot must be taken NOW. We have all passed the theoretical part of the course, required for the A-license, and opening the door for IPSC shooting. We now have to turn the theory into action, and must prove that, what we know to do, also is what we do.

Hhhhmmm – where have we heard that before 🙂

TLUS POMW III have been a course, designed and formed by POMW Chief developer, Kimu Sensei, who has lead us through the different phases, that are the difference between range shooting and IPSC. One of the tools you can use for this, is terrain shooting. Terrain shooting takes place outdoors, and on targets of different sizes and at different distances. You may think that it is better to shoot outside, in the fresh air. And that is correct, you get a lot of fresh air. Especially when it is windy, like it was on part 2 of the course. But we will come back to that.

The first part of the course took place on a Monday, in the beginning of September. The day was a beautiful sunny day, which kept everybody in a happy mood. The temperature was pretty warm too, so when I showed up at Hanebjerg, and first stepped into ”Hullet”, it was almost like stepping into an oven.

”Hullet” is surrounded by very high hills, for safety. These hills causes ”Hullet”, to act like an oven. Something that can be a factor, if you don’t prepare, with a cap, lots of fluids and food. After setting up the targets and marking the distance to shoot from, we got started. The goal of the training was to see what level we were at, with the technical part of shooting, but also to cure my ailment, which is fear of recoil.

As a man, you hesitate to admit, when something scares you. But I admit that shooting the 9 mm, is not my favorite thing to do, and I react where tensely, when shooting this type of gun. The result is there after, showing that the belief I have, that I will not get a hit, grows. The training we had this day, completely cured me, and my results on the targets proved to me, that I can hit, both from up close, and from a distance. So there was hope ahead, for me too 🙂

We shot at distance 7-12-15-20 and 50 meters, standing still, with start from 45 degrees, meaning that the gun points down towards the ground in a 45 degree angle. And not until hearing the command, you raise the gun, take aim and fire.

That day ended with a little competition among the group. We were to shoot at a target, 50 meters away. The first to compete was Jens Hanshi-dai and Martin Renshi. As far as I remember, and with the chance of being corrected, the result was, 6-4 to Martin Renshi. Up next was myself and Kjeld Renshi-dai. I quickly were behind 8-2, but got back up to 8-6, and could see Kjeld get a little nervous. You shoot until you miss, then it is the other shooter. So Kjeld got up to 12-6, then I came up to 12-10. But then he really got started, and hit the next 6 shots in a row. He ran out of ammunition, and I thought to myself, ”now he is going to get it”. But when the score was 18-14, I also ran out of ammunition, so I was the one that ”got it”. It was a really good experience, because it showed the ability to hit with a gun at that distance, and the sound it made when you hit the steal target was great 🙂

We shot about 600 rounds with the 9 mm, in about 5 hours that day. Next morning you could feel the effect on your body, and inner organs. But that was a good thing, because it gave us heads up, of what was to come.

When the course was over, it was home, to practice on the areas where there was room for improvement.

When the day for part 2 arrived, the weather had changed from sunny to overcast with a nice and cold wind. So you had to dress for the conditions. The cap stayed on the head, to keep it warm and to shade, when the sun did peek out ever so often. The course began with a recap, from last time, and was followed up by control of ”reset” on the gun. Meaning that you had to feel, on the tricker, when it was ready for the next shot. When you have control of this, then you can shoot as many as 4-6 shots a second. They may be shooting fast in the movies, but the best shooters in IPSC can shot faster.

It is not easy. While you have to get a ”feel” for the tricker on the gun, you are also affected by the environment around you. Here I could tell, that the training gave results. The concentration and focus was held at a good level, and the shooting of the day went really well. There were still things to improve, but it had improved since last time, and the fear of recoil was pretty much gone. So, now it was about ”the pull”, and maintaining correct hand position. This day we shot about 600 rounds, and again, we could feel it the next day.

Both on part 1 and part 2, we got a chance to shot transition. Meaning, shooting on targets placed differently. Different heights and different distances. Here we got a really good brief on, what is important to focus on, when shooting at several targets. Like using the recoil, and which target to shoot on first, and which to end on. A really important and educational run through, which will be exciting to test the following weekend.

When you have targets at different distances, for example one at 7 meter and one at 20 meter, then you have to decide, which to shoot at first. Do you shoot at the closest, and get some confidence by hitting it, or do you believe in your self from the start, and shoot at the targets the furthest away first? A question, that can only be answered by each shooter, for themselves.

Part III of the course was a recap, and test of how much we had learned through the three parts, and if we could use it in praxis. Quick shooting from several distances, quick shooting at targets with different placements and heights. Decision on which targets to shoot first, and which to take next. A really good training and run through, that brought it all together, and gave insight to what we will go through, for the A license course. It gave us all a real good idea, what you have to go through mentally, as IPSC shooter.

Of course there is the physical part, but mentally more happens than you imagine. The external factors are big, and if you can not shut them out, and focus on the assignment, then you will not be able to complete successfully.

I think that all, without exception is looking forward to the A license course. To pass it, but also to turn months of training and preparation into action, which hopefully will give a good, and passed, result.

We have all seen IPSC shooting on ”you tube”, and of course there is a kid in all of us, we are only men.

Hhhmmm – I think we have heard this before 🙂