POMW III – Can you do other than your best? 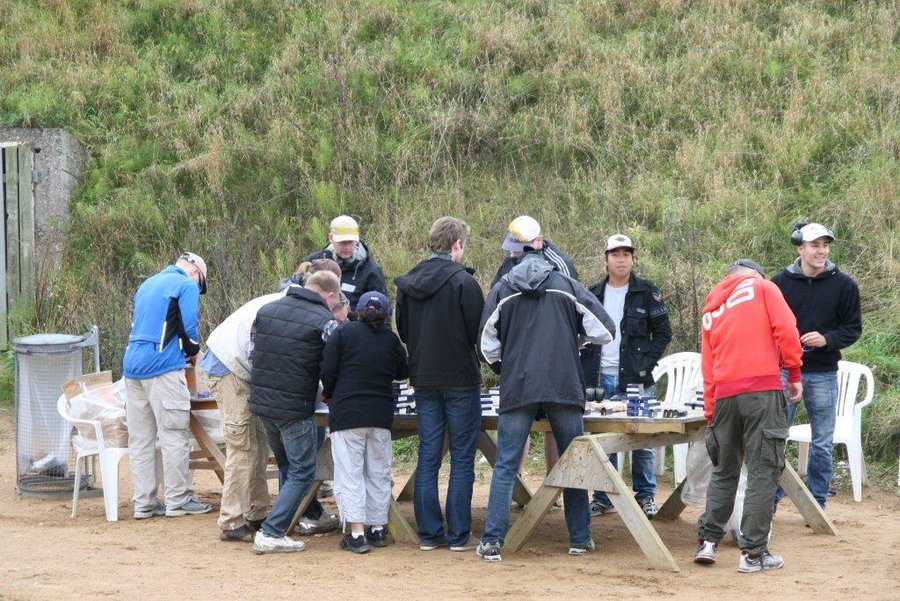 It was great to visit Hanebjergs shooting range in Hillerød again, when I met the first Sunday in POMW III regi. It was like meeting an old acquaintance, which isn’t so weird, because it was here my outdoor sessions where, and here I, along with other head instructors was taught most of my knowledge, I have gotten from Kimu Sensei. It was also here, that we on a rainy weekend in October 2012 completed our IPSC A-license course. Over all, it was a nice reunion.

It had been a while, since I had shot with either of my 9 mm CZ and my 0.22 S&W, so I was a little excited to see, if it would go better than last time. It was just after the summer event 2013 and I must say my arms weren’t feeling so well that day. But that is not an excuse, no matter what, its about the attitude.

The first lesson was mostly about, getting rid of the rust, and making the participants more confident in terms of shooting with a CZ pistol. It actually didn’t go that bad. I could feel that I had trained during the summer and from seeing the spread on my target, I could see, I had gotten rid of some of the mistakes, that had been following me for a while. But now it seemed to brighten up, and I took from POMW III’s first lesson with a good feeling in the stomach.

While POMW III was going, the Hsingi II course also started. And the following weekends, there would be Hsingi II on Saturday and POMW III on Sunday. So those next Mondays would probably bring tired arms and legs. 🙂

After Saturdays Hsingi II course part 1, it became Sunday and time for POMW III part 2. At 8 o’clock, we met at Hanbjerg shooting range to get ready, so that the first shot could be fired at 9 o’clock. This was according to environmental law, which must be followed J

We started in what Hanebjerg calls “The hole”. It is an area where you can train IPSC and terrain shooting. We had put up poles with IPSC targets which the participants would hit in the Alpha zone. Three teams with five participants on each team. Numerous shots were fired. Not like in the wild west, but as in a shooting club that trained seriously. It is certain that it had not sounded like that in Hillerod for a while. But watch out Hillerod, we are coming back, and we are deeply serious. After four hours in “The hole” it was time for precision training on the big range, which is 25 meters. Again with 3 teams, and rotation so everybody got their turn to shoot.

In “The hole” I thought it went very well, but when we had to shoot on point targets, my focus had a tendency to want something other than what I did. All of my shots sat under the black target, and I had followed the same procedure as in “The hole”. My first thought was of course that the sighting was wrong, but they don’t move unless you move them. And I hadn’t done that, so it could only be my shooting technique that was off. I thought about it when I got home, and when I dry trained, I also had it at the back of my head.

Third and last part of POMW III came closer, but before that, we had the pleasure of Hsingi II part 2. Which included training, that you physically could feel in your body up to a week after, and in parts of your body, longer.

Again we met early at Hanebjerg on a morning that first offered grey weather, gradually the sun came through the clouds, and for some participants it shined brightly. 🙂

This time I had the pleasure of joining a team with the two only “chicks” on the team. J It was nice to shoot with someone, who absolutely does not have anything to prove to others, but instead just does their best. And that , I must say they did.

When we were done shooting in “The hole” our target had a hole the size of a handball right in the Alpha zone. And of course there were also bullet holes in zone C and D, but not close to what was seen earlier. I also had to admit to myself that dry training worked. The uncomfortable feeling, shooting the 9 mm, disappeared quickly, and safety was a normal reflex.

Throughout POMW III to chief instructors had been under education as Range Chief . The purpose of the education is, to be several who can share this job, when SDK Skyt moves indoor in Ballerup. It became clear to me, that if you want an event to function optimal, then it takes preparation. It takes 110% preparation.

At a shooting event, it only takes one error, to end up in big trouble. You may for other events, only prepare at 80%. But that is not how it works here.

During a shooting event, the result of an error, may very well be deadly. This way of thinking, you can also use when preparing for other things in life. It creates an attitude, which really calls for action and situational awareness. Of this the last POMW III, brought clear evidence. Here there was no doubt and even though a few changes created an upset in planning, there was a clear control of the event and especially safety.

When I returned home from Hanebjerg, and before totally crashing, I thought about, how the POMW project actually has shown, that if your attitude is not good, then it shows in your result. You may not hit an elephant right in front of your nose. If your attitude is wrong, in other of our events, then it might be difficult sometimes to see the consequents, and there fore also difficult to see the importance of good attitude. It shows that where the consequence is not clear, then people have a hard time changing.

The participants of POMW III, could very clearly see, that the attitude is everything in life. All the Alpha mails, got soundly beat, by the two only women on the course. It was a pleasure to see how attitude can make a huge difference, especially after 4 hours of shooting, with about 200 rounds per hour. The arms went num, but even so the female participants could find the right attitude, and just do their best – because, that is all you can do. 🙂

I would like to thank all the participants for shooting sessions full of humor, and a big thanks to Kimu Sensei, for teaching at several levels simultaneously.