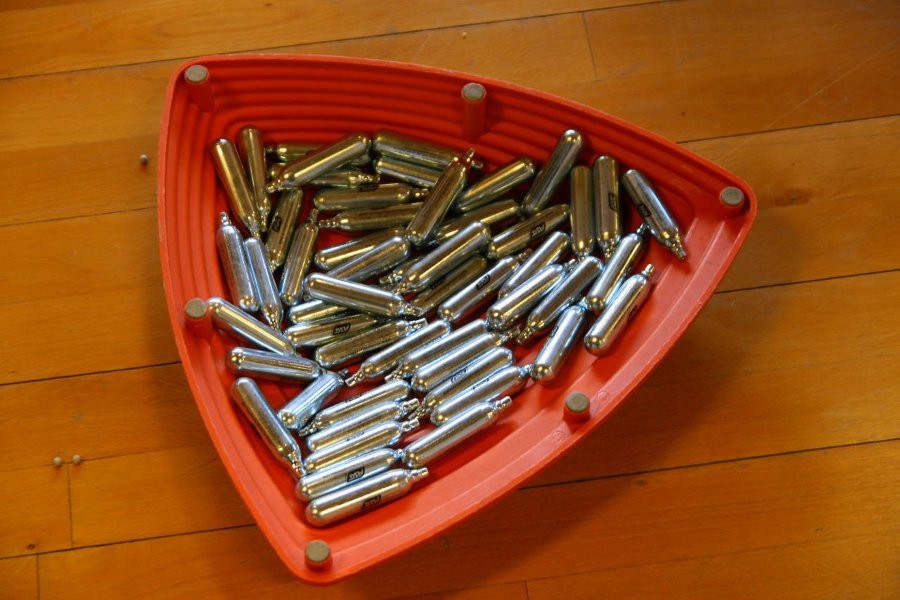 As written in the last article about POMW TSM B, there would be 3 weeks between the first follow-up and continuing course POMW TSM C.1. Essential for this course and the entire message and clue was attitude, attitude and attitude as well as beautiful linked to the ongoing Hsing-I TSM course also, it’s with Kimu Sensei’s words no coincidence that the 2 courses are running parallel. The attitude is exactly what would be the small difference 🙂 between a POMW student of martial arts background and a soldier who does not have the mental attitude in their training. But it would be very interestingly to see if the course, after the 3 weeks, already is able to confirm Minouchi Sensei’s thesis, and if there would be a difference between shooting from the last course, where nearly all participants with no shooting experience was and to this course, where everyone was supposed to make the dry training in about 30 minutes daily after the POMW shoot manual and learn the phrase “Imagination is very important” 🙂 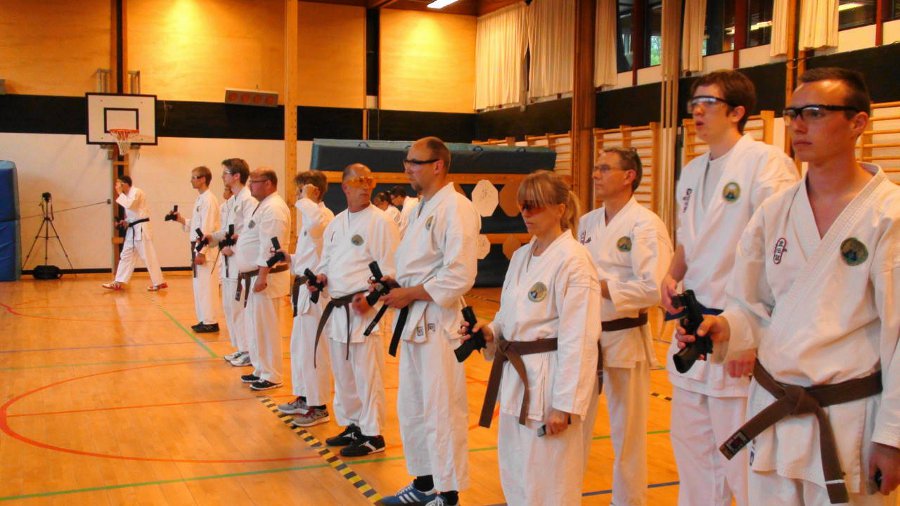 It was with great excitement, enthusiasm and nervousness that the 24 POMW students showed up, late on Friday 01-06-2012 again to give it some good energy. This time it was to participate in a clean RYUHA POMW TSM C.1. With only 5 min. delay Kimu Sensei could boost in today’s shooting. To set the standard for the day, Kimu Sensei would like to know how the participants had prepared themselves for the last 3 weeks. You could say that this was a attitude test, since the participants were divided by whether they had prepared with the dry training every now and then with decreasing intervals, which of course was revealing, but also learning, as all must have maximum benefit of the course. Participants were then compared in pairs, and found in the “shooting range” which, like the last course was marked with distances to the targets of 3, 5, 8, 10 and 15 m Kimu Sensei repeated rapidly about the safety rules, where a breach of these, like last time, would result in a DQ on the bench (It should be said that we came through the day with only 2 on the bench ;-)) After this he explained what participants should achieve to shoot from any distance, while repeating that the course had increased preparation time between shots end the further away you got from the disc i.e. the more time you got, to run through POMW shoot handbook staging inside the head. The shooting went really nice and the first few hours flew quickly and Kimu Sensei and the participants were very happy when they could actually hit something not just on the 3 m, but actually all the way out of the 10 m (21 m). You may be tempted to say that the dry training in the POMW shoot handbook worked! :-), which as Kimu Sensei stressed “There is no difference between the training base in Yakami Shinsei Ryu and shooting,” are both the foundation and you trained well, on it so it works, even when you need it. 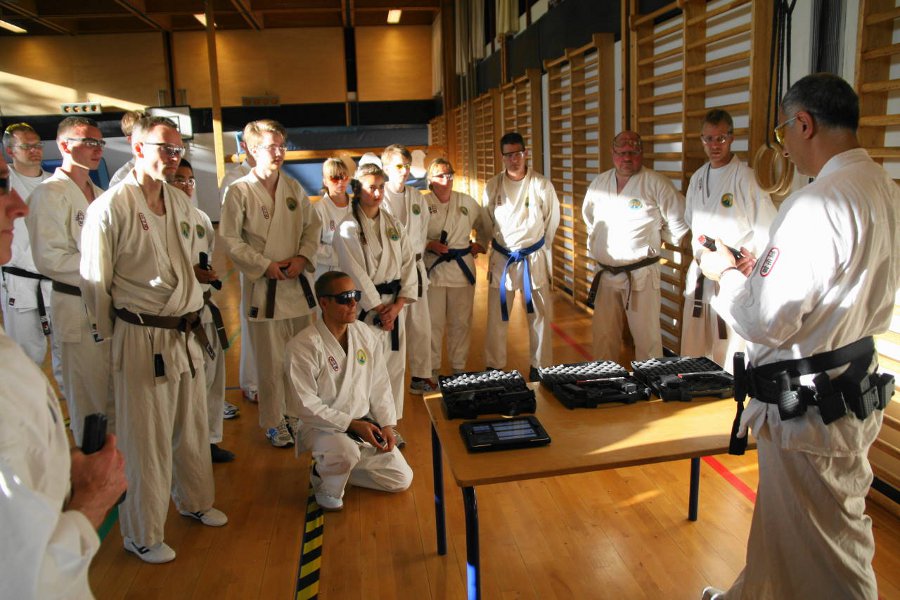 In preparation for the next day’s workout, Kimu Sensei had prepared an extra challenge. Participants were divided into teams of three and in turns these teams would be allowed to try out a SIRT (Shot Indicating Resetting Trigger, a laser marking gun that simulate a real Glock 17/22 pistol and has weight and flue as a recognizable and virtually cost the same ..). For this purpose, was suspended 6 IPSC sport wheels (3 full size and 3 smaller to simulate larger distance). With a SIRT you show and train optimal POMW shooting technique since SIRT’ens green laser light reveals all errors in flues, handstand, etc. All participants were given time in the company of SIRT’en, while the other participants continued with air guns, at different distances to the discs. Very accurate at around. 20.30 all had come through with SIRT’en and it was time to conclude.

Ending in a circle that gathered around a campfire, it was time before everyone took home a well deserved rest before the next day’s TSM C.2 and C.3. Kimu Sensei looked really pleased with today’s effort by all participants. He had come forward to the day’s lessons in the hope, that the level was high among the participants and they had kept the discipline in the last 3 weeks and you could see an actual improvement. If he have had a concern it was washed away by the rain which now stood down in bars outside the gym and a big smile spread on his lips, as he and the participants could see that they had proved Minouchi Sensei’s theory, with respect to lane shooting and actually exceeded expectations, so he had to go home and change a little bit on the next day courses in POMW. This again shows Kimu Sensei’s intransigence and desire to meet people where people are regardless of timing, because if people shows the power of learning, they should also get maximum benefit, there’s no need to waste each other’s time. 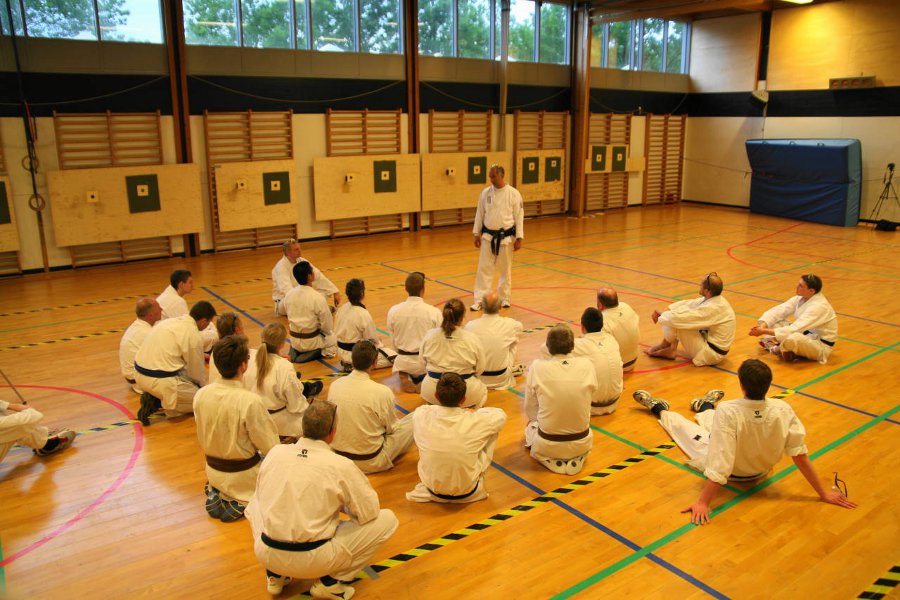 It was more than clear to see, that the 3 weeks had a great significance and that the POMW shooting manual works 100%, if no one is cutting corners or let himself be tempted to train with bullets and gas, when you’ve been told that you MUST train on the basic, but that’s how it is with all Yakami Shinsei-ryu. There was indeed a marked difference from the first POMW course, where many could not hit a “barn door” even at short distances, for now 3 weeks with only dry training, where 90% of the students delivered so-called “clusters” in the shoots and 80% even exclusively in the alpha zone (middle black area on a target).

Today’s course was over and the participants could go home and train to the next day’s challenges, which would contain transitions, shooting on the move and maybe a hint of IPSC .. wauuuw 🙂 But this can be read about in the next article. 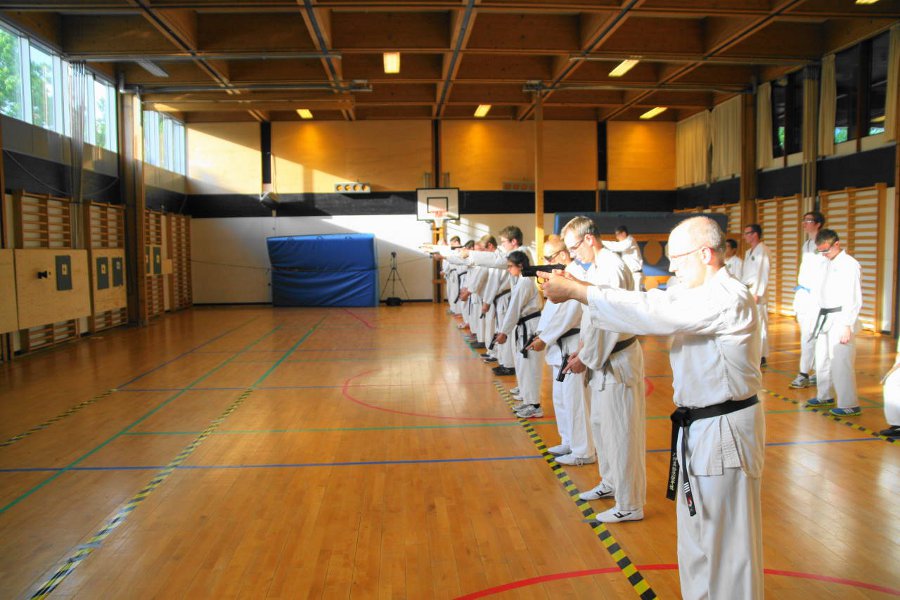