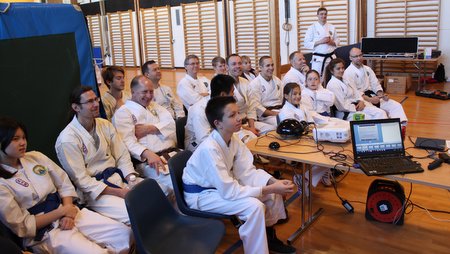 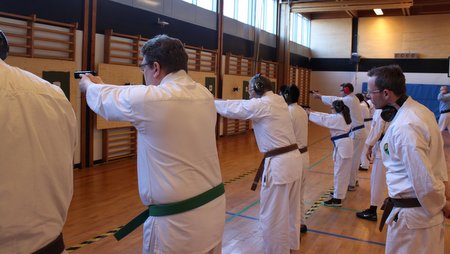 Spring was in the air the Saturday morning in April, when the 20 participants to the POMW course turned up at Tjørnelyskolen in Greve. For about half of them it was a recap of POMW 1 TSM C & D and a prelude to the POMW 2 course, for the other half it was the ending of POWM 1. Kimu Sensei had already tested POMW 1, 2, 3 and 4 for that matter, and had also moved forward to the end of the POMW project, which is about rifle and LRS (long range shooting). Therefore, this repetition was also a transfer of the POMW 1 course to the 2 instructors Søren Renshi and Martin Renshi, who would be responsible for the day’s lessons, with help from Jens Hanshi-dai and Claus Shisu who would be working behind the scenes. Prior to the course the 2 instructors had already spent many hours with Kimu Sensei to discuss how the course should proceed. This type of discussion takes place before each ‘transfer’. Kimu Sensei is responsible for all development in Shindenkan which is both very time consuming and a lot of hard work. The other instructors are assisting with the operational part. This is how it will be until we get an additional Menkyo 🙂

The night before, the two instructors, with assistance from Kjeld, Claus, Karsten and Oliver, had done most of the preparations and the rehearsal to be ready for the nearly 8-hours course the following day. At 8:30 on Saturday morning the course started with a half hour long power point presentation, which took the participants on a journey through for example the history of POMW, the development of firearms, the man behind the weapon, war and peace and lots of other goodies to wake up the mind and curiosity. Søren Renshi ended the presentation by once again reviewing the POMW shooting techniques and safety, which is the essence of a POMW course, as well as the foundation (just like basic training in karate). Once you master this, shooting become easy; it is to just aim and hit 🙂

The first practical exercise was, for the participants two and two, to assess and observe each other’s shooting techniques i.e. holding the gun correctly, having the right body posture, using arms and legs properly and so forth. It is a useful exercise to look at each other, as you often can see things that the other person needs to correct, as you probably are having the same problems. In continuation of this exercise the air-guns were filled with CO2 and bullets and the participants were now to make recap on the runway shooting from different distances. You cannot shoot without eating and drinking, so after this lesson half an hour was squeezed in where the participants could enjoy their lunch packages and discuss the training and its benefits.

The following lesson introduced something new, except for those who were on the recap, namely transition shooting and trigger control (called shoot and reset). Transitions within shooting means switching between several targets. The participants were divided into two teams, one using Airguns and the other using the less messy and noisy SIRT’s (laser guns). With the SIRT guns, new targets were introduced to the participants: the original 6-rimmed IPSC targets with Alpha, Charlie and Delta zones. Using these targets would get the participants familiar to them in case they wanted to move on to the POMW 3.

Shoot and reset is used to be able to shoot faster and with control, when live ammunition in added to the gun. This lesson was followed by the next one, where the participants were divided into 3 groups that were sent out to each of their “stage” to practice shooting with airguns while moving (back, forth and sideways), the SIRT guns towards IPSC moving targets and finally with standing still with an airgun aiming at plates and poppers at several distances and depth. This session was designed to introduce the participants to shooting in practice (several types of targets, distances and ‘moves’), culminating in the final lesson of the day, which was IPSC with airgun. Each participant had the opportunity to get through the lane consisting of 3 stages put together. Here, the rules from IPSC, that the participants has become familiar with during the previous exercise, were applied. Likewise, they had to change the magazine along the way, and therefore they had virtually all the elements of IPSC shooting in use.

Yet another POMW course was completed organized and judging by the comments and facial expressions, it was a positive experience. You can read more about it when the articles from the course will be published on our website. Now the POMW course moves outdoors. Kimu Sensei as the POMW chief instructor and developer organises the POMW 2 in Hanebjerg in Hillerød. Here, the participants will start shooting with live. It will be with a combination of 0.22 salon gun and a 9 mm pistol. After POMW 2 is optional for the participants and their wallets if they want to continue to the exciting POMW 3. POMW 3 is shooting realistically (shooting in the terrain and mini-IPSC) only using ‘serious’ weapons and SIRT (firing while moving). This course is also a good start if the participants (like all the POMW instructors), would want to take an IPSC A-license.