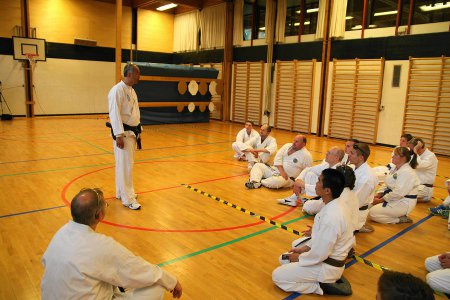 It was Friday afternoon, and all the Chief Instructor’s was fully occupied, setting up the range so that POMW B and C1 could get started. We got started at 17:00, with about 12 hours of practical shooting training according to The Shindenkan Skydeteknisk handbook, and with Yamana Sensei as our guide.

It was 12 hours, divided between two days, with shooting on a range at different distance, and shooting in motion at several targets. Something I had looked forward to, since I had never tried it before, and it would be exciting to see, if your shooting experience and training of shooting basics, would make a difference.

As Friday’s course proceeded, it became clear, that training according to The Shindenkan Skydetekniske Handbook, makes a big difference. When you make a solid foundation, and build upon that, step by step, then you can only get a good result. And it clearly showed, that the attendees who just three weeks before could not hit a barn door right in front of them, now could hit the target. It also showed for those of us, who have trained the basis for about 5 months, with better and better spread on the target. So when the Saturday course began, it was with the feel of an enthusiasm in the body we got started.

Saturday began with range shooting at different distances, timed. Meaning that you had 3-5 seconds from distance 3 meters, and for example 5-7 seconds from distance 5 meters. This went pretty well, until we got to distance 7 meters. At this time, my focus was slipping, and my attitude were going ”south”. I did not use the time available, and my shots were spread all over the target.

What really happened was, that I shot above my ability, and did not follow instructions. The success from distance 3 and 5 meters, was misused by me, because I ignored my basis and focused on hitting. The worst of it was, that the rest of the team, went in the same direction. We were two Chief Instructors on the team, and we both made the same mistake. In stead of being at our best, and being good role models, we became the exact opposite. Had we been Officers in charge of a platoon, then everybody would have been dead.

”Then, How can you compare it”?
Well – that is one of the things that the POMW course is all about, leading yourself and byt that also leading other people. If you are not able to lead yourself then you cannot be the leader of other people. At least not without serious consequences.

The teams situation did not improve when we got disqualified, due to a gun being placed on the floor. That was not good at all, and something had to be done. The only thing to do in that situation, is to look inwards, and correct you attitude. If the attitude is not correct, then the result will be there after. If the attitude is, that you do not train your basis correctly, and in the volume necessary, then you will get results accordingly. You can not change what has already happened, but you can change your attitude, so that it does not happen again. 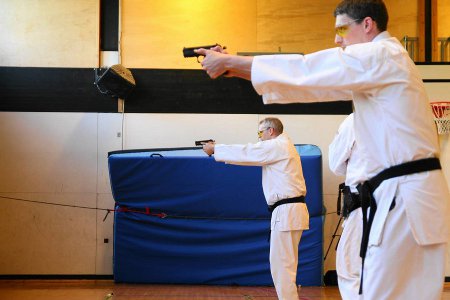 Following a break, it was time to shoot at multiple targets. Meaning, once more straight ahead, but with movement in the body, towards two targets. It evolved to being timed, and this resulted in a team match, where my team went up against another team. After the shoot, with an impartial judge, the two teams were lined up, and the rest of the attendees were to stand with the team, they believed to have won.

My team got over 90% of the attendees standing with us. My first thought was that they already knew the result, but I definitely got something to think about.

The result was, that the other team had won, with 25% better shooting than us. It was not the result that surprised me, but that you as a Chief Instructor and Black Belt, can be seducing the masses, without intending to.

Most of the attendees who believed our team had won, had made the judgment based on the two Chief Instructors of the team. On the opposite team, there were only one Chief Instructor. So with two Black Belts compared to one, then we had to be double good. We probably would have been, if our attitude had been correct. But it wasn’t.

You might also blame the guns, the sunshine, or that it was late in the day. That is just bad excuses, for not wanting to recognize, that it is the attitude that makes the hole difference, and nothing else. Had we kept the right attitude all the way through, then the hole team would have been pulled up, not down. It must be mentioned though, that despite two ”not so great” roll models. The rest of the team made a really good effort.

Following the match, it was time for shooting in motion – which I had really looked forward to. First in a line towards a target, and there after back away from a target. Here our experience from Yakami-Shinsei ryu and walking basis, really matters. Then it was time for shooting at several targets along a line. About 15 targets had to be hit, which required a change in body posture along the way, to be able to perform this sort of shooting.

I must admit, that the level of difficulty with shooting in motion, surprised me, but at the same time, I was happy to find a link to Ju- and Jo- Jutsu.

During this session, we did not just shoot with air guns, but also laser guns were used. The same kind that is being used by some of the best military elite teams in the world.

The afternoon quickly rolled forward, and the course neared the end. But before it got that far, an IPSC range was created, that we all had to try. All through the day there had been different possibilities for shooting at the targets used on an IPSC range. Cardboard targets at different heights, Poppers (metal targets which fall down, when hit), and targets which show different lights when hit.

All the attendees were lined up in a row, and had to go through the range, one at a time. First to hit 15 targets along a line, changing body posture along the way, there after change direction 180 degrees, change magazine, and then 7 targets each requiring two shots. There after, change towards the right and shoot at 3 poppers on the floor, and a plate on the wall requiring two shots. All timed and with as few missed shots as possible.

Now it was very important, that all we had learned about shooting technique, attitude and focus, were in place, or it would not go well. Several got disqualified along the way, because of safety faults, and a few ran out of ammo underway and Co2, so that they had to make extra magazine changes along the way. During this pass, it became clear to me, why IPSC is called the Formel 1 of shooting. Everything has to come together in a higher unity.

I have following the course thought about, the reason that just about everybody had success with the shooting during the POMW course. And it is actually pretty simple. The foundation is there, and can be build upon, step by step, so that the optimal learning can take place. Basis is the foundation, just as it is in Karate. The difference is perhaps, that in shooting you see the result clearly on a target, where in Karate you may have difficulty seeing the result on your self, because you have to look inwards. And it may be difficult to believe in a result that gets over shadowed by ”Jantelov” and self worth.

So here is the message to all:
F… ”Janteloven” and believe in your self. Because you can do so much more than you or others believe. It has just been proven in POMW B and C1.