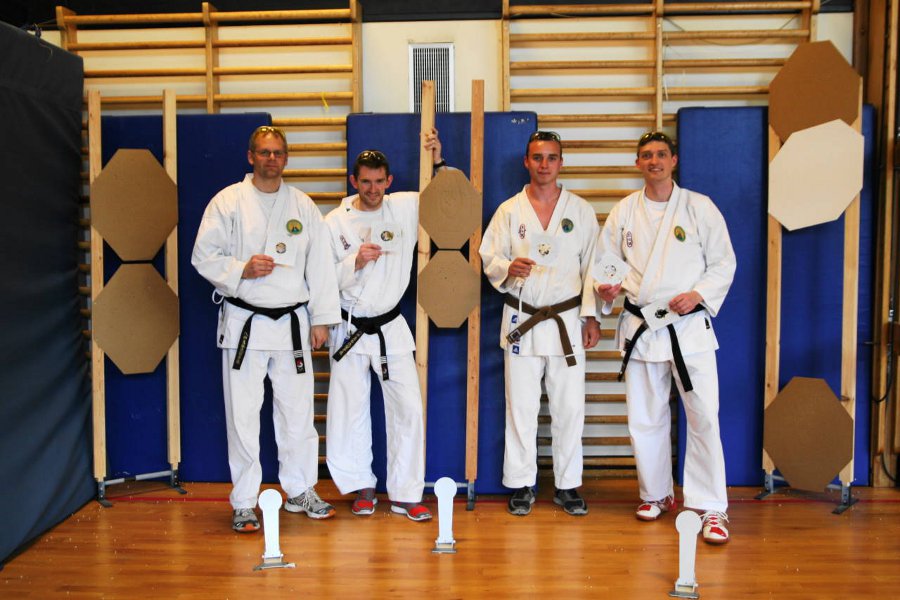 After a completed POMW TSM C1 course, where Minouchi Sensei’s theses were thoroughly proved, it was time for another step up to more advanced shooting. The question was, if Minouchi Sensei’s theses also worked when the attendees performed transition shooting while moving (changing between several targets), and IPSC (shooting in a practical way), and not just range shooting, as it had been so far.

A group of tired but also anticipant attendees showed up Saturday morning, to continue Friday’s training. It did not take much coffee and breakfast rolls, before everybody again was excited about the prior days success, ”yes, we can hit” and hit very well. As Kimu Sensei expressed it, we were looking forward to a long hard day, and the day before it had been mentioned that we might continue one hour longer than scheduled. But that just meant, that everybody would get extra training, adding up to about 7 hours in all. The level had been pretty high the prior day, and it was also a tired Kimu Sensei that pronounced, that due to the great performance the day before, he had felt it necessary to stay up half the night, to change the course, increasing the level to fit the attendees, so everybody would benefit. This again shows the way Kimu Sensei thinks, and the way he respects other people. It is never to late to improve on something, even at the cost of ones own resources and in this case, a good nights sleep.

The first lesson of the day, where an add on to the prior days shooting, where Kimu Sensei introduced what is called, transitions. Transitions is still stationary range shooting, but at several targets, in this case 2 targets. The attendees were divided into groups of 4, where one would shoot while the other 3 either were at the loading table or practiced POMW shooting technique from the next marked distance. The difference from earlier shooting is, that you first take aim and shoot according to POMW shooting handbook, in and angle to one side, where after you aim the gun at an angle to the opposite side and fire another shot, then lower the gun. The difficulty in this exercise is not the first shot, and perhaps not the second shot, but when you shoot again, and this time at the second target first. Meaning that you shot for example right to left, in stead of left to right. Why is this more difficult? Well, most of us, has through life trained one eye to be dominant, and this eye will want to take over, constantly. This is very clear when you move the aiming direction to the one side, with the dominant eye. But the attendees had a benefit that most other shooters don’t, they have Tai-sabaki from Karate, which can be used, and especially what we call shiho level 1 (see and perform), where you move focus before you move, which is exactly what you do, when shooting at several targets. First you look, you focus, move the gun and POMW shooting technique. The transition shooting were naturally also trained from several distances. To have a little competition and fun, Kimu Sensei had also planned a little shoot out, where the two teams with the most points (most hits in the black on the target), were to meet as a round off to the transition shooting. From the pictures you can see for your self, who were the clear winners, with 25% better score – NICE, but there were a couple of Chief Instructors with red ears, although they made a come back later in the day.

Following a short break, it was time for the next lesson of the day, and the start of POMW TSM C3, shooting while in motion. First the attendees where divided in to two equal groups, which then again were divided in to smaller groups. Kimu Sensei wanted to add another level to the shooting, which demanded more room. So one team started up SIRT again, training transitions at 3 targets at increased distance, while the other team two and two trained shooting in motion, at a straight line towards, and away from the target. The speed increased as the attendees got used to moving forwards and backwards while shooting with the air guns. A line began to form at the loading table and several CO2 canisters ran dry. Pretty quickly most found the trick to moving, and could once again create a connection to karate, and walking basis. Keep your center of gravity at the same height, then it is also easier to keep the aim in the same height, and on target 🙂 It is not enough, to just move forwards and backwards, so the next on the program was naturally to move sideward’s. When you move sideward’s, while shooting, it is important that you underbody twist, so that you actually is turned up to 90 degrees in relation to your upper body, meaning that you walk on a line along the targets. It was practiced so that you first walked forwards and shot to the left, and there after walked backwards and shot to the right, and naturally using POMW shooting technique, even though there now was a difference, with the shooting arm either bend or straight, depending on which side you were shooting at.

When everybody had been through both SIRT, and shooting in motion, the slowly began to have the smell of IPSC. So that the attendees where not taken straight out on the long stage, arranged as a part of the course, the attendees were first to try shooting at the targets used for IPSC. For this purpose, to smaller tracks where set up, where one was IPSC cardboard targets (symbolizing a torso), and the other with 3 poppers and a plate with a hit indicator. Poppers and plates of metal. The attendees continued in two groups. One group trained again with SIRT at the cardboard targets, and the other group trained with air guns at poppers and plate.

Now it was time for, what many surely had been waiting for, but did not know if time would permit – IPSC. Since it had to reflect reality, where there were many competer’s, you only had opportunity to ”walk” the course once. This of course put pressure on the attendees, who had to remember everything they had learned inclusive the safety rules, such as, you always point the gun towards the target, or away from audience and judge, also when changing direction on the course, which in this case was almost square. At the same time, you also had to change magazine during the shoot, so that you would get training doing this too, which is done at high speed, during IPSC. A lot of the attendees moved at high speed, and it was clear that they had gotten comfortable with both safety and shooting in motion, even though there were also several disqualifications, and in some cases several to the same person, making a repeat mistake, tsk tsk. 🙂 During the IPSC part the mood was if possible even more fantastic, and everybody cheered for each other, in the hope to see an even faster time with less shooting errors.

As expected the day ended about an hour late. The full evaluation had only positive critique towards the course, which had given something to reflect upon, but also had once again proven the Theses of Minouchi Sensei. At the same time it was clear that even in a competence such as shooting, the basis technique from karate can be used as a tool to improve and correct errors.
The first part of the big POMW project, the course requirement up to 1. dan., is now complete, and it has so far been a huge success in several ways. First of all, the engine behind the project, the theses of Minouchi Sensei, has been chiseled in history as ”Myth approved”, and not ”Myth busted”, to use the words of a well known American TV show. Secondly, Kimu Sensei has once again proven, that he in his non compromising way has managed to create a project, that was meant to succeed, although it also took a lot of resources to complete. Shindenkan has added yet another success to the history of Denmark, as the first all-round martial arts system, which can now also add the modern warriors weapons competence to its résumé. Something that is sure to attract attention both nationally and internationally.