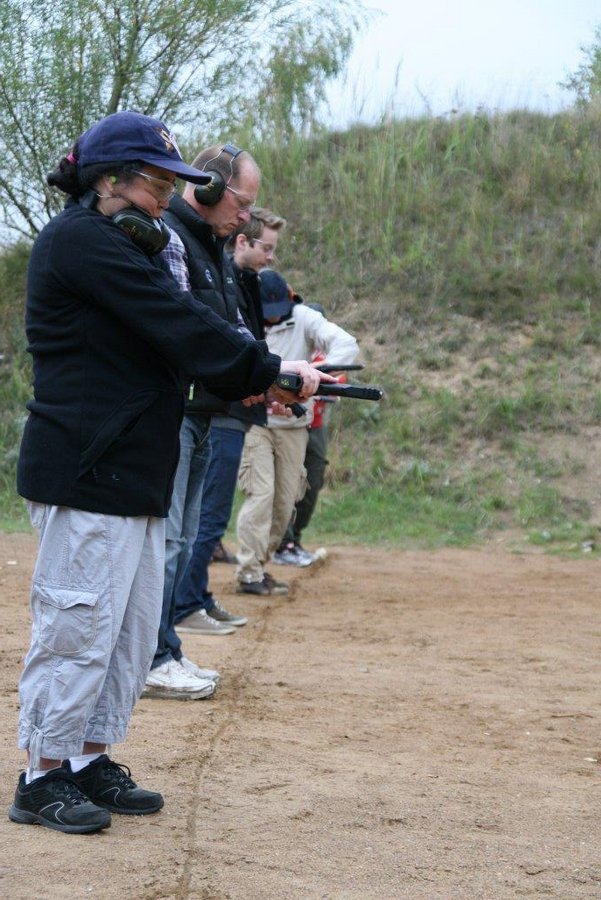 Moving beyond fundamentals to dynamic shooting, but keeping the fundamentals, and being a practical shooter

I have now also trained dynamic shooting – in the form of IPSC shooting. Outside under open skies, with sun, rain, wind and the cold. And it is like watching Pinocchio, being magically transferred from a wooden doll in to a real living boy.

In POMW! 1 we were taught safety and basic optimal shooting technique, according to Shindenkan’s Shooting Manual. It was practiced during lots of ”dry training”. Further more it was practiced shooting on the range, evolving to terrain shooting with transition, and on to IPSC with movement – all with air guns, supplemented with SIRT (professional laser gun). For us, the Chief Instructors, there were also shooting with cal. 0.22 at the Shooting Club.

In POMW! 2, which we the Chief Instructors attended at the same time as POMW! 1, we were taught (again :-)), safety as well as basic and optimal shooting technique, according to Shindenkan’s Shooting Manual. It was practiced doing even more ”dry training”. Further more it was practiced doing range shooting with cal. O.22, as well as a little shooting with 9mm at the Shooting Club.

In POMW! 3, we brought the theory, basic and optimal shooting technique, in to ”the field”. During 3 compact sessions of 5-6 hours of effective shooting, our shooting was done in a more realistic setting. First of all simply because we were under open sky, with light and weather as the Lord and DMI (Danish Weather Service) had decided for the day. For me it meant, that the shooting, came to life, and became more pleasant. Shooting in door, or partly in door under an awning, is pleasantly free of rain and blinding sunshine, but also free of life, when compared to shooting fully outdoor. Shooting also took place in full IPSC rig, meaning belt with pistol holster and magazine holder, so we could get used to it. Out door we trained range shooting with increasing distance (7, 12, 15, 20, 25 and 50 meter), both as single shot and double action, as 2 shot with double action and single action, and as series of 5 shot, to practice reset, which is the shortest possible movement of the tricker, before the pistol can refire.We also practiced terrain shooting, which is shooting with transition between different targets, and we went through the recommended order in which to hit the targets, and how to judge if the recommendation was suitable to one self. Kimu Sensei put a lot of importance, on the rhythm in the shooting, which had to be constant, and not in waves, or with changing speed.Throughout we were ”range chickens”, we picked up used shells. It gave us a golden opportunity to think about our own performance, analyze and correct errors before the next round.

In the first shooting session we focused on precision, and analyze of our shooting series, also against steel targets on a 50m distance. We got individual feedback from Kimu Sensei regarding our errors, weaknesses as well as strength and current improvements. In the second shhoting session we focused on keeping the precision and then add some more speed, this is what IPSC is all about – finish as fast as possible. We also began to practice strategy and choises – meaning how you prioritize the shooting order of the different targets.

Next phase was to add movement, and that takes us to IPSC.Here we went over, how best to move the body, into the shooting positions, and in which way. Here we have much knowledge from Karate, in body movement, balance etc, and could pull forward lots of examples relevant to IPSC.Here again we used SIRT guns – professional precision laser guns, with the exact same weight, balance and feel as the Glock gun. This meant that we could pull from our holster and move during shooting, which otherwise requires an A-license in Denmark. We trained, that you moved through the different targets and ”shot” moving forward, moving sideward, moving backwards, and moving to the other side, exactly was we had trained with the air guns on POMW! 1.At the third shooting session, we also tried navigating around barricades, and learned how best to get into a shooting position, and out of shooting position again, fast and safe, as well as how to point the gun during movement.We ended the third and final shooting session, by running through a stage, to see how the combination of movement and precision turned out, and if we would make good choices.On my first ”run” I made it through our little IPSC stage in 41 seconds, which was the second fastest time. It was a good time, that I wanted to improve on the second run. That is just not what happened, because I chose to run closer towards the target to insure, I would hit it. BUT it does not take much running before your pulse increase and that makes it harder to keep the pistol stabile. So my time for the second (and optimized run) was 47 seconds. That will teach me to trust my shooting :-).In reality, you also have to consider whether you have hit a popper or a plate, something experience will tell you, that you can not always hear, wearing hearing protection (electronic hearing protection is recommended), and you also have to concentrate on changing magazine. Here you change the magazine before the pistol runs empty, to safe precious time, and to know where you are, and how much ammo you have left.Everybody remembers the scene from Dirty Harry, where Clint Eastwood pretends not to know whether he has another round in his Magnum .44. Life is to short not to know if you are out of ammunition – or it can shorten your life! 🙂

IPSC is cool and alive, and in connection to light and fresh air. IPSC is also a great deal harder, while I at least have a sense of performing something alive and active, instead of range shooting, where you have all the time in the world to get the perfect shot. But that is not reality! There is never time enough, to put everything on hold, until you are done analyzing the situation. When you are done analyzing, the rest of the world has moved on, and your result has become obsolete.I look with excitement forward to the license test, where my shooting ability, combined with my ability to move, will be judged as a hole.